May 13, 2020
Notable Acquisitions Despite Economic Challenges
By Victoria Campisi 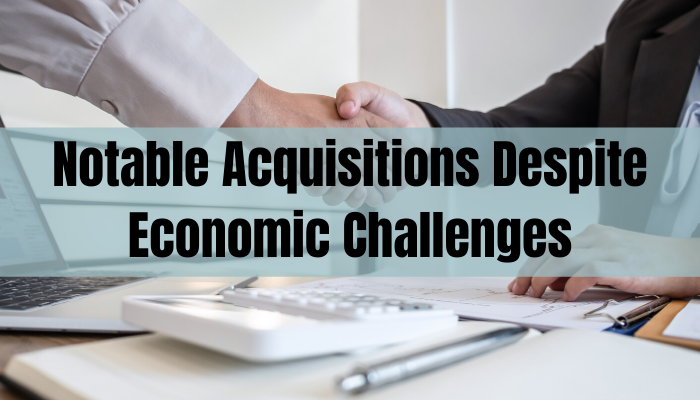 In the midst of economic issues due to COVID-19, companies are still exploring acquisition deals.

Uber Technologies Inc. is seeking to acquire Grubhub Inc., reported The Wall Street Journal (May 12). In February, Uber approached Grubhub with an all-stock takeover and the companies have been in talks since, according to people familiar with the matter.

Grubhub recently proposed that Uber pay 2.15 of its shares for each Grubhub share, which Uber rebuffed as too high, and the companies are now discussing a lower price, the people said.

"While our policy remains to not comment on specific market rumors, we want to reiterate our views with respect to M&A-related matters given the current level of recent speculation," Grubhub said in a statement. "We remain squarely focused on delivering shareholder value. As we have consistently said, consolidation could make sense in our industry, and, like any responsible company, we are always looking at value-enhancing opportunities."

The talks may not produce a deal, but if one came to pass it would reshape the meal-delivery business, which has experienced heightened prominence by the pandemic.

Meanwhile, Utz Quality Foods is reportedly in talks to be acquired by Collier Creek Holdings, according to people familiar with the matter, reported Bloomberg (May 11). A deal valuing the snack maker at more than $1 billion, including debt, could be reached as soon as this month, said the people.

The companies were reportedly in talks before the start of the pandemic, but no final decision has been made and negotiations could always fall through. A representative for Collier declined to comment, while a representative for Utz didn’t respond to a request for comment.

In addition, Quirch Foods acquired protein distributor Butts Foods, reported Deli Market News (May 11). This is the first acquisition for Quirch Foods and represents its efforts to expand its geographic footprint following its distribution center opening in Greensboro, NC.

Deals are also being made in regard to food facilities and warehouses. For example, a unit of Seneca Foods Corp. acquired a Del Monte Foods vegetable packing plant in Sleepy Eye, MN, reported Minneapolis/St. Paul Business Journal (May 13). Seneca paid $2 million for the 123,794-sq. ft. facility.

Realterm Logistics acquired a refrigerated food distribution warehouse in Opa-locka, FL, for $26 million, reported South Florida Business Journal (May 13). The company noted despite the challenges in the economy, a strong demand for industrial space serving food distribution still exists and "the need for localized cold storage facilities has increased."

Grocery shopping has evolved from a Main Street event (where we go to our local market frequently to purchase food and goods) to an order most anything, from anywhere, at any time online. Online shopping, which started off slowly, was initially an underwhelming...

According to recent data from the Plant Based Food Association (PBFA), U.S. retail sales of plant-based foods outpaced total food sales during the pandemic by a considerable margin. Peak panic buying in mid-March saw plant-based food sales up 90% compared to the previous year. This trend continued for the following four weeks, with total plant-based...