Feb 19, 2019
Will Cashierless Technology Take Off? Maybe Not Everywhere
By Chris Campbell 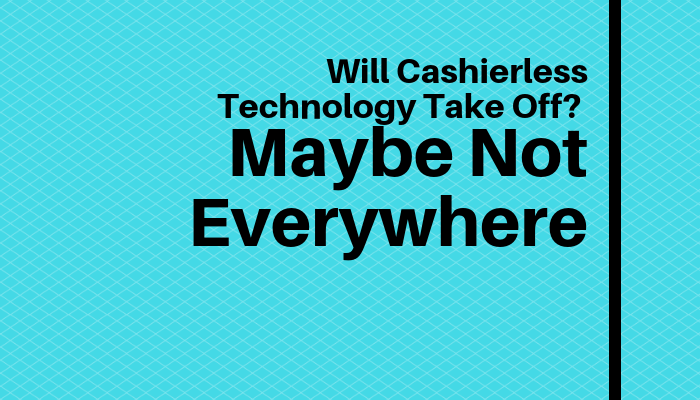 Cashierless technology is gaining traction, but in some communities, that may be a nonstarter.

It's no secret: since Amazon first unveiled its Amazon Go concept, the press, consumers and other retailers have been enamored with cashierless technology, and rightfully so. The technology promises to remove the friction of checkout with a high-tech flavor, and one doesn't have to look far to see its many use cases. In a world where retail continues to be redefined by the technology it uses, cashierless seems to be the way to go.

However, the reality is the technology may not be accessible to those without credit or debit cards. And at least three governments are working to address that.

Philadelphia's City Council approved a bill that would ban most cashless stores as proponents argue cashless stores discriminate against low-income residents who don’t have credit or debit cards. Amazon stated that if the bill passed, it would not consider locating an Amazon Go convenience store in Philadelphia, reported The Seattle Times (Feb. 15).

Meanwhile, Rhode Island introduced a bill to ensure customers can pay with cash in stores. The bill makes it unlawful for any retail establishment offering goods or services for sale to discriminate against a prospective customer by requiring the use of credit for a purchase, reported Idaho Statesman (Feb. 18).

Additionally, New Jersey lawmakers began discussing such a ban in December 2018. The state Senate Commerce Committee unanimously approved the bill 5 to 0, which would prohibit retailers from refusing to accept cash. The state's legislatures approved the billy, and now, it only requires Gov. Phil Murphy's signature before going into law, reported Chain Store Age (Feb. 4).

Philadelphia is no stranger to issuing controversial rules, including its now-famous soda tax, so I'm not sure anyone would be surprised to see the city's government issue such a decree. However, the fact that the technology could be barred, or at least limited, in the entire state of Rhode Island and/or New Jersey is very interesting.

The limits would be particularly interesting for the food and beverage space. Grocery stores already work on small margins and sell food to low-income populations every day. SNAP and WIC cards are used by many of these populations, but cash remains a popular spending vector.

In light of these facts, it is my belief that cashierless technology should be a supplementary transaction avenue. Retailers have invested heavily in omnichannel strategies to ensure people can purchase online and in-store. It seems that the best way to serve consumers is through convenience and options, so providing cashierless checkout, buy online, pickup in store and mobile wallets alongside cash and card options would serve to preserve a customer base, rather than fracture it.

However, as the two pieces of legislation remain pending, we cannot for certain say how this will affect the retail sphere. You can be sure the Food Institute will track any updates from Philadelphia, New Jersey or Rhode Island, and keep an eye on any legislative developments regarding cashierless technology.