May 20, 2019
Whole Foods Remains the Priciest Grocer
By Victoria Campisi 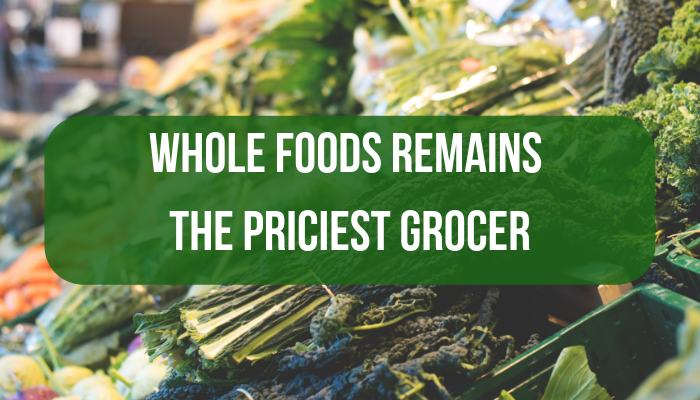 Whole Foods still has the highest prices, but are they deterring customers?

Despite the widely publicized discounts the grocer made in April, Whole Foods prices remain the highest overall among U.S. food retailers, according to Bank of America Merrill Lynch, reported CNBC (May 14).

Prices were to be reduced by an average of 20% on select items in the store, the company said in a press release. "Whole Foods Market continues to maintain the high quality standards that we've championed for nearly 40 years and, with Amazon, we will lower more prices in the future, building on the positive momentum from previous price investments," said Whole Foods co-founder and CEO John Mackey.

The price cuts were heavily focused on produce but were less competitive for items found in the center of the store, Bank of America analysts said. The analysts found that Walmart continues to have the lowest prices and its momentum will likely be unscathed by Whole Foods' price cuts.

"We continue to believe that Amazon is not having an impact on Walmart's grocery momentum," Bank of America analyst Robert Ohmes said. "In our most recent price study in Philadelphia, Whole Foods' basket was still priced at a +39% premium to Walmart. Produce [was] still at a +25% basket premium to Walmart, and center-of-store items at a +58% premium to Walmart," he added.

Additionally, the study found the price premium for organic produce is narrowing versus conventional produce, which the analysts attribute to competition in the category — especially as Walmart and Target expand their organic offerings.

Meanwhile, foot traffic was up 16.5% at Whole Foods in the first quarter of 2019, an increase versus the same quarter in 2018, according to data from inMarket. However, "dwell time" is down, reported MarketWatch (May 20).

The grocer has seen visits of less than five minutes, known as "micro visits," rise 10%. inMarket argued that changes imposed by Amazon, including the deployment of Amazon Lockers and the launch of streamlined online order pickups, contributed to the increased traffic.

Amazon Lockers are self-service kiosks where customers can pick up packages and drop them off for return.

"Amazon seems to be focused on inspiring visits from their customers by incentivizing their Prime membership holders with special perks and doubling down on their digital omnichannel strategy," the report said. "This may also indicate that shoppers are visiting more frequently than the previous year."

The data also shows a 2.5% drop in new shoppers as the brand implements a strategy to focus on current shoppers, and a 0.2% drop in "dwell time," which inMarket attributes to the increase in micro visits.

These short trips could mean that the increased foot traffic might not be due to customers doing their grocery shopping at the store. Perhaps customers are being put off by the fact Whole Foods still has the highest prices. The cuts in April may not have been enough for Whole Foods to shake its "Whole Paycheck" reputation any time soon.