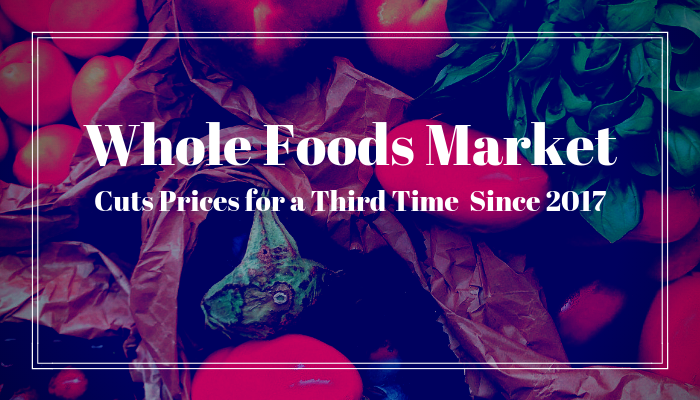 The Amazonization of Whole Foods Market took another step forward during the first week of April as reports emerged that the companies are lagging in attracting Prime members.

A third round of price cuts since Amazon purchased Whole Foods in August 2017 began April 2, offering lower prices on fresh produce for all customers and expanded Prime benefits including more exclusive weekly deals. Amazon is seeking to keep up with other grocers, like Walmart and Kroger, who are holding prices down.

Prices will be reduced by an average of 20% on select items throughout the store as Whole Foods will emphasize the reduction of peak-of-season produce, including greens, tomatoes and tropical fruits. Examples of the new prices include large yellow mangoes ($1 each), mixed-medley cherry tomatoes ($3.49/12-oz) and organic bunched rainbow chard ($1.99 each).

"We will continue to focus on both lowering prices and bringing customers the quality they trust and the innovative assortment they expect from our brand," stated John Mackey, Whole Foods Market co-founder and CEO.

In addition to new lower prices for all shoppers, the grocer will double the number of exclusive weekly Prime Member deals to offer more than 300 promotions. Examples of exclusive Prime member deals in April that will rotate on a weekly basis include air-chilled, no-antibiotics-ever whole chicken at $1.79 a lb., a savings of at least 40%; spiral sliced ham at $3.99 a lb., a savings of 33%; fresh, sustainable wild-caught halibut fillet at $16.99 a lb., a savings of 35%; 35% off all Justin's brand products; 40% off all Kite Hill plant-based products; and 35% off all Epic brand products and 20% off of prepared sandwiches and wraps. Members receive an additional 10% off hundreds of sale items throughout the store as well.

"When Whole Foods Market joined the Amazon family, we set out to make healthy and organic food more accessible," said Jeff Wilke, CEO of Amazon Worldwide Consumer. "Over the last year, we've been working together tirelessly to pass on savings to customers…now [customers] will experience that same Whole Foods Market quality with even more savings across departments."

Amazon ownership hasn't brought as many Prime members into Whole Foods stores as some analysts expected, reported The Wall Street Journal (April 1). A recent Wolfe Research survey found 11% of Prime members shop at Whole Foods several times a month; by comparison, 65% of Prime members shop on Amazon's website at least that often. The firm projected that lower prices would likely help Amazon draw more Prime members into its natural grocery chain. Store managers concurred, although others voiced concerns that lower prices could hurt their operating budget, at least in the short-term, according to a person familiar with the discussions.

The Food Institute will keep our members updated as the price cuts take effect at Whole Foods.