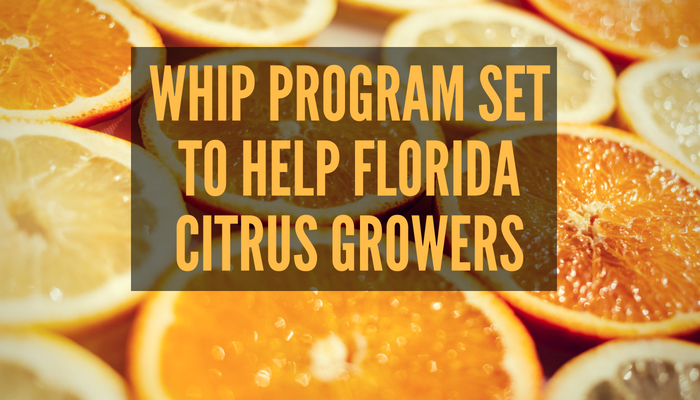 USDA officials unveiled details regarding the Wildfires and Hurricane Indemnity Program (WHIP) at meetings in Florida the week of July 2. The program, which will include about $2.6 billion worth of funding, is expected to help the state's citrus producers that are dealing with the aftermath of Hurricane Irma, which struck the state Sept. 10 and Sept. 11, 2017, reported The Ledger (July 4).

The program will require applicants supply basic information, including grove acreage, the number of trees by variety and the date of planting for each tree. Trees planted within four years before the hurricane will not be eligible for assistance.

Additionally, growers will need to provide up to five continuous years of harvest data for each application. Without that information, USDA will use countywide averages to determine payments. Although there is no ceiling to receive aid, growers will be divided into two classes which are determined by how much of their annual income is derived from ranching or farming.

A $340 million block grant program was established to cover other losses. Officials are still working on the details of the program, but is expected to provide benefits for replanting or rehabilitating damaged trees. Some growers will be compensated for losses sustained in the 2018-2019 citrus season. Lastly, the program is expected to provide subsidies for purchasing crop insurance.

Growers in the region are comparing the program to a 2004 program that was established in the wake of hurricanes Charley, Frances and Jeanne. Half of that season's crop was wiped out, and Florida Citrus Mutual CEO Mike Sparks noted farmers were put off by the differences in the two programs

In 2004, the hurricane relief program calculated needs based on how close the hurricanes came to specific groves. Additionally, the average crop losses within four designated zones away from the storm were used for payments. Specifically, growers did not need to prove actual crop insurance to get hurricane assistance.

Despite the concerns regarding the differences in the program, most growers were happy to learn the details regarding WHIP.

"I'm very appreciative of the program and all the people who worked to get it," said Kyle Story, a Lake Wales-based grower whose family also runs a grove management firm. "I think it's a fair and equitable program."

John Barben, an Avon Park-based grower and former Florida Citrus Mutual president, echoed the sentiment. "We're getting help from the federal government. We worked long and hard to get it. The growers need it," he said. "One thing about the WHIP program is that it's based on a grower's individual losses, so it's fair."