Oct 2, 2018
Walmart to Require Blockchain from Fresh Food Suppliers by 2019
By Chris Campbell 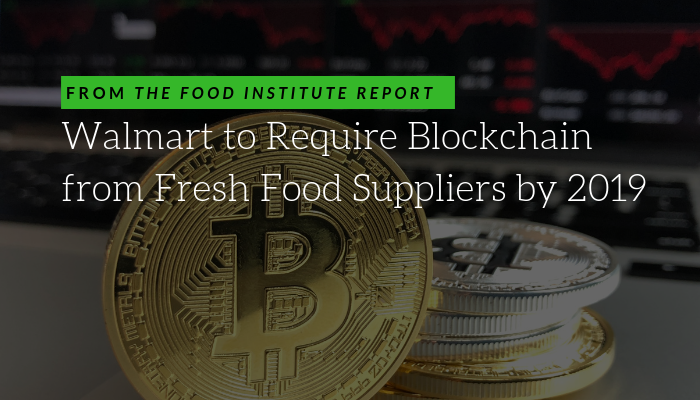 Walmart is getting to the front of the line when it comes to requiring suppliers to digitally trace back their products.

The company informed leafy greens suppliers that they will need IBM Food Trust blockchain-enabled traceability in place by September 2019, according to a letter the company sent to suppliers. Direct suppliers will need to have one-step-back traceability on the network by Jan. 31, 2019, and end-to-end traceability is expected by Sept. 30, 2019.

The Walmart Food Traceability Initiative will increase transparency in the food system and create shared value for the entire leafy green farm to table continuum, according to company officials.

Over the past 18 months, Walmart piloted new technology in collaboration with numerous suppliers and IBM, which the company claims demonstrated that meaningful enhancements to food traceability is possible. IBM Food Trust, has been developed for consumer companies, including Dole, Wegmans and Unilever, to track products moving through the supply chain.

The initiative will capture digital, end-to-end traceability event information using the IBM Food Trust network, which the companies believe can reduce the amount of time it takes to track a food item from a Walmart store back to source in seconds, as compared to days or sometimes weeks.

In the letter, the company stated current one-step up and one-step back model of food traceability is outdated, arguing there is a strong public-health and business-case for enhanced food traceability. By quickly tracing leafy greens back to source during an outbreak, Walmart argues the impacts to human health can be minimized, health officials can conduct rapid and more thorough root cause analysis to inform future prevention efforts, and the implication and associated-losses of unaffected products that are inaccurately linked to an outbreak can be avoided.

The traceability initiative will include more than 100 farms that supply Walmart with leafy green vegetables, which will be required to input detailed information about their food into a blockchain database developed by IBM for Walmart and several other retailers exploring similar moves.

“It is the first real instance of doing this at scale,” said Brigid McDermott, vice president of IBM Blockchain, reported The New York Times (Sept 24).

IBM is trying to position itself as a leader in the emerging technology of blockchains. It is competing with established companies like Microsoft and Ethereum.

For Walmart, the initiative fits squarely into two key strategies: bolstering its digital savvy and emphasizing the quality of its fresh food to customers.

Walmart’s embrace of blockchain highlights how difficult it still is for grocers, including the nation’s largest, to keep track of their food. The company recently conducted an experiment trying to trace the source of sliced mangos.

It took seven days for Walmart employees to locate the farm in Mexico that grew the fruit. With the blockchain software developed by IBM, the mangos could be tracked in a matter of seconds, according to Walmart.

At each stop along the way, people handling produce for Walmart will make an entry on the blockchain, signing off when they receive it and then when they move it onto the next person in the chain. IBM and Walmart say they are already tracking other products like yogurt and poultry on the system.

All of the records for the Walmart blockchain are being stored on IBM’s cloud computers, for Walmart’s use. Blockchain will allow Walmart to track food from the field, through washing and cutting facilities, to the warehouse and finally to the store, pinpointing which part of the field and at what time the vegetables were harvested.