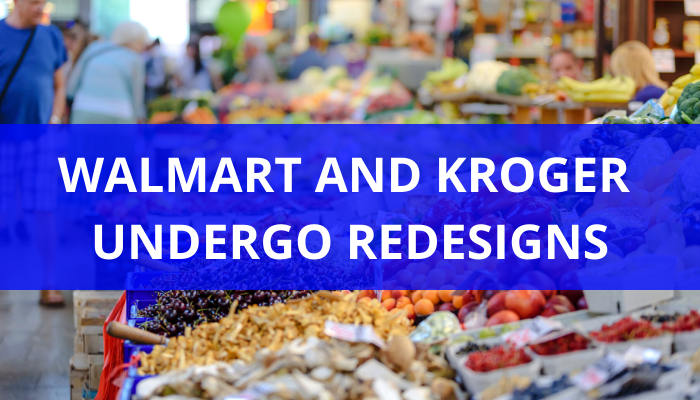 America's largest grocers are remodeling stores to draw in customers.

Walmart redesigned its produce department with more light, better signage and specially angled fixtures. It is using an open market feel, with low bins of products, wider aisles and a designated organic section.

New bins will allow customers to see everything available in the department when they walk into the store. The company is using colorful, abundantly filled displays to highlight quality and freshness. For example, there are large bins of ripe red tomatoes and sizeable displays of seasonal items, such as squash and pumpkins.

The new format is expected to simplify workloads for associates, making it easier for them to stock produce and refocus time on better serving customers. Walmart plans to update the majority of stores by summer 2020 and many others will be renovated as part of remodels.

Meanwhile, Kroger plans to refurbish stores at a slower pace so it can keep more stores fully operational and shift its focus back to groceries, which generate about 75% of sales, reported The Wall Street Journal (Nov. 21).

In 2017, the company laid out its plans to reinvigorate business after more than a decade of same-store sales growth ended. Over three years, Kroger would overhaul stores and invest in technology. The project, which involves more than $9 billion capital investment, would generate $400 million of operating profit by 2020, according to the company.

Sinc 2017, Kroger has remodeled about 20% of its 2,700 stores as part of its "Restock Kroger" plan. In September, the company pulled its 2020 profit guidance, acknowledging problems implementing the three-year initiative.

In November, Kroger introduced a new logo, signage and advertisements to emphasize its wider offering of fresh foods, among other core products. "There is a certain pace you can go at and there are only so many things you can do at one time," said Gary Millerchip, Kroger's CFO.

Executives also claim rearranging items on shelves, changing the layout of some aisles and expanding space for in-store pickups of online orders caused confusion among store workers and shoppers.

Kroger and Walmart aren't the only grocers renovating stores in hopes of attracting customers. National chain Albertsons expects to remodel about 240 of its stores in its 2019 fiscal year, CFO Bob Dimond revealed on an earnings call. He noted the company already opened seven new stores and remodeled 99 in the first two quarters of fiscal 2019.