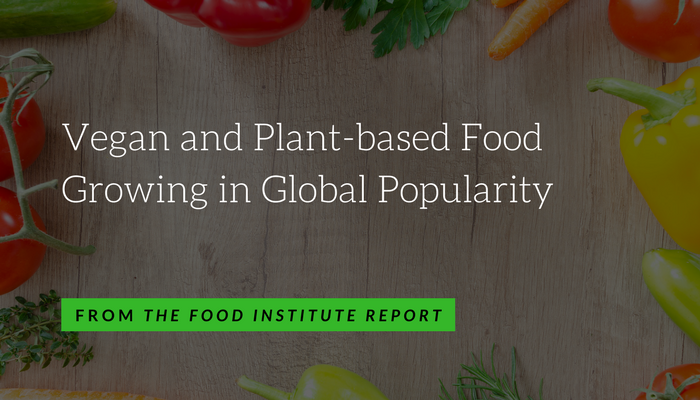 The opportunity to capitalize on the meat-alternative trend goes beyond targeting consumers around the world who follow plant-based diets. Consumers who want to eat healthier, more wholesome food that is better and safer for them and the environment are an important part of the equation.

Consumers who eat meat alternatives are most likely to say protein content (40%) is important to them. Canadians predominantly get their protein from eggs, nuts, dairy and beans, and emerging proteins like insects and algae are starting to become appealing, Gregoire said.

The global vegan ice cream market is expected to grow at a CAGR of 9% from 2018-2022, according to a report by Technavio. The expanding global vegan population is a major factor driving the market’s growth. “Over the last decade, the number of people adopting veganism and opting for vegan diets has increased by about 300%,” the report stated.

A key market trend is the rising popularity of vegan ice cream among Millennials.

To cater to the rising demand among this cohort, “players in the market are also coming up with new and innovative flavors of vegan ice creams,” said a Technavio senior analyst in food research.

The Americas dominated the market in 2017 with around 45% share. But by 2022, the Asia Pacific market is expected to witness the highest growth in terms of market share around the world.

Wholesome, clean and unaltered foods are becoming a priority around the world in the wake of food safety scares and scandals, according to Technomic’s 2018 Global Megatrends, and as a result, the company predicts that plant-based foods will remain popular in 2018.

While 34% of consumers globally say they tend to purchase vegetarian fare in restaurants, an even broader group has adopted the “flexitarian” idea of forgoing meat occasionally for the sake of their own health or the global environment, the research stated.

New plant-based fare is coming out of countries with a strong meat-eating tradition. This is evident in the rise of Hareburger, a vegetarian, vegan and health-focused concept in Brazil (their burgers are made of lentils, quinoa and shiitake mushrooms). Australian steakhouse Hog's Breath Cafe offers an avocado and vegan schnitzel wrap, and in the U.K., the Temple of Seitan turns vegan meals into snack food with indulgent, deep-fried, wheat protein-based "chicken" served with french fries. McDonald’s is testing the waters of plant-based, meat-free dining with the McVegan burger at its restaurants in Sweden and Finland, according to Technomic.