May 29, 2019
USDA to Provide Aid as Trade War Wages On
By Chris Campbell 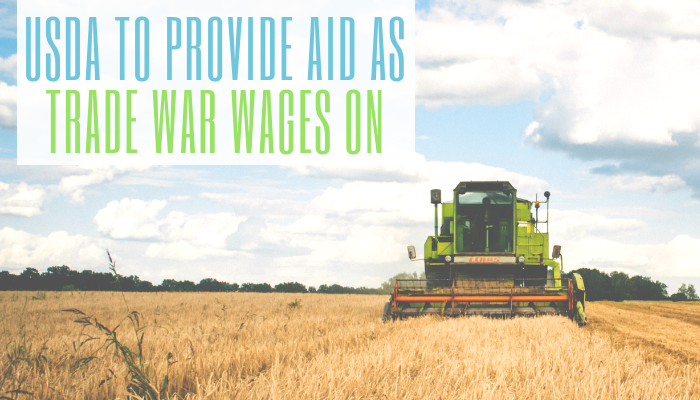 As the trade war with China drags on, the U.S. will make funding available to help support farmers as tariffs are enacted on their products.

Specifically, USDA will offer $16 billion in a second round of programs to aid farmers in 2019. The funding, which is projected to match impacts from Chinese tariffs on U.S. goods, will be allocated to the Market Facilitation Program ($14.5 billion), Food Purchase and Distribution Program ($1.4 billion) and Agricultural Trade Promotion Program ($500 million).

USDA seems to have learned a few lessons from the aid package approved in 2018. "Our team at USDA reflected on what worked well and gathered feedback on last year's program to make this one even stronger and more effective for farmers," said Secretary of Agriculture Sonny Perdue.

Although not finalized, USDA published some details regarding the Market Facilitation Program:

The payments are intended to help farmers absorb costs of managing disrupted markets, to deal with surplus commodities and to expand and develop new markets at home and abroad.

Additionally, payments will be made in up to three tranches, with the second and third tranches evaluated as market conditions and trade opportunities dictate. The first tranche will begin in late July/early August after Farm Service Agency crop reporting is completed by July 15. If conditions warrant, the second and third tranches will be made in November and early January 2020.

USDA's Commodity Credit Corporation (CCC) Charter Act authority will be used to implement a $1.4 billion Food Purchase and Distribution Program through the Agricultural Marketing Service to purchase surplus commodities affected by trade retaliation such as fruits, vegetables, some processed foods, beef, pork, lamb, poultry, and milk for distribution by the Food and Nutrition Service to food banks, schools, and other outlets serving low-income individuals.

Further, the CCC will use its Charter Act authority for $100 million to be issued through the Agricultural Trade Promotion Program administered by the Foreign Agriculture Service to assist in developing new export markets on behalf of producers.

Industry reaction to the announcement was mixed. Western Growers President & CEO Tom Nassif noted the association was happy table grapes and the broader tree nut industry were included for direct payment options, but that it was "important to acknowledge that the current trade aid package – as was the case with the last one – will be insufficient to make the industry whole. Indeed, it will take American farmers many years, if ever, to recover from the lost trade revenues and, more importantly, lost markets that have resulted from the continuation of trade disruptions with China," reported Fruit Growers News (May 24).

Sen. John Hoeven (R-ND), chairman of the Senate Agriculture Appropriations Committee, met with North Dakota agricultural leaders May 28, arguing the aid should include coverage for more crops and should not cut back on payment limits. Those in attendance argued they'd rather be working on new markets rather than new bailouts, reported The Fresno Bee (May 28).

Others are worried that the aid package will disproportionately help large-scale operations at the expense of smaller mom-and-pop farms. Environmental Working Group's initial analysis of the first aid package found the large disbursements were given to farms with enough acreage to have collected eight-figure subsidies in the 1995-2017 time frame, and fears the 2019 program will follow in the footsteps of its predecessor, reported St. Louis Post-Dispatch (May 29).

The American Farm Bureau Federation (AFBF) signaled tepid support of the aid package, with AFBF President Zippy Duvall noting that "while farmers and ranchers would rather earn their income from the marketplace, they have been suffering during the agricultural downturn and trade war. This aid package will help us weather the storm as the Administration works to correct unfair trade practices that have hurt the U.S. economy for too long."

The California Farm Bureau Federation (CFBF) echoed AFBF, with CFBF President Jamie Johansson saying, "We appreciate this second round of assistance for those who have suffered loss of markets and crop value due to retaliatory tariffs … Ultimately, the best assistance for farmers and ranchers would be to resolve the trade disputes and open markets for California farm products."