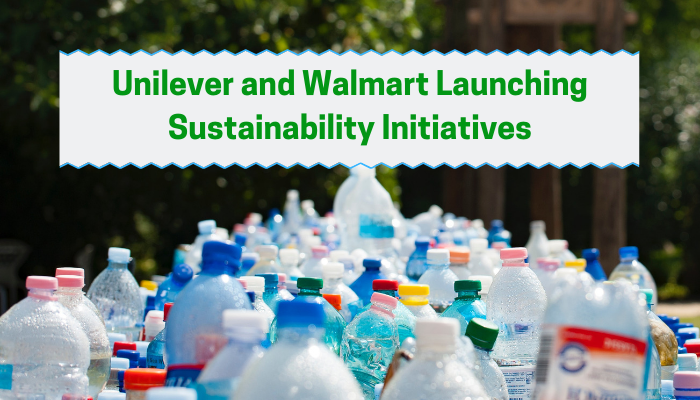 That's according to the Grocery Manufacturers Association (GMA), who reported that 80% of those companies committed to producing fully recyclable, reusable or compostable packaging by 2030 at the latest.

"Few industries are able to adapt as quickly to consumers as CPG,” said GMA President and CEO Geoff Freeman. “The CPG industry is a leading force for change, but there is no person, industry or government that will solve this alone. We want all stakeholders at the table, ready to make the hard decisions that will create lasting change.”

Unilever North America is among those CPG companies, and it just unveiled a three-part plan to expand and accelerate its reduction of plastic waste. The plan calls for reaching 50% recycled content in plastic packaging by the end of 2019 and adding "How2Recycle" labels on all packaging by 2021.

"We know that the response from the consumer goods industry is critical in determining the speed that positive change takes place around plastic packaging, and using less, better or no plastics is a priority at Unilever," said Unilever North America President Amanda Sourry. "We are significantly accelerating our plastic packaging commitments in North America and are thrilled to be working alongside other industry leaders like Walmart to push these initiatives forward."

Globally, Unilever made plastic packaging goals, which will be accelerated in North America with three significant packaging initiatives including: reaching 50% recycled content in plastic packaging in 2019, adding How2Recycle labels on all packing by 2021 and partnering with Walmart on "Bring it to the Bin" shopper education program.

"These Unilever initiatives are important steps, but we can't create a circular economy for plastic packaging in isolation," added Sourry. "We need collective action to tackle the problem at the source by working with forward-thinking companies like Walmart, advocating for systemic change in government and recycling facilities, working closely with plastics suppliers, and educating consumers. Only together will we answer the urgent call made by the plastics issue we are facing."

At its 2019 sustainability milestone summit, Walmart unveiled that checkout carousels at its U.S. stores will include reuisable bags that will be available to customers for purchase. The aim of the new campaign is to help reduce plastic waste and increase customer convenience by placing reusable bags in easy to find and highly frequented sections of its stores.

As part of the launch, Walmart is rolling out a new assortment of reusable bags that are made with post-consumer recycled content. The initiative will begin rolling out to stores in May and follows a recent announcement by Walmart on a series of plastic waste reduction goals that seek to advance the sustainability of the retailer’s private brand packaging by making it 100% recyclable, reusable or industrially compostable by 2025.

Meanwhile, 75% of Americans changed their behavior to be more environmentally conscious, taking steps to recycle more frequently, buy sustainable products or reduce waste, according to GMA. However, 92% are unsure or believe anything with a plastic resin label could be recycled curbside, although only two of the seven codes are consistently recyclable.

"Confusion is not a sustainable system," said GMA President and CEO Geoff Freeman. "America's recycling future cannot depend on a patchwork system that undermines good intentions with bad policy."

Though more than 90% of respondents say they feel they know their local recycling rules, fewer than six-in-ten reported researching them. Consumers largely support a more uniform system, as almost 75% believe more standardized rules at the national or state level would bring more clarity to recycling.

In addition, 40% of Americans are "aspirational recyclers" who recycle items that they're unsure will meet the requirements in hopes that any unrecyclable items will be later sorted. That number goes up to 44% for those who say they are very environmentally concerned and to 49% for Millennials.

The data shows that Americans want to recycle, even if they aren't entirely sure how. Fast-reacting CPG companies have a chance to capitalize on this trend by becoming more environmentally-conscious and providing their customers the guidance to recycle correctly and often.