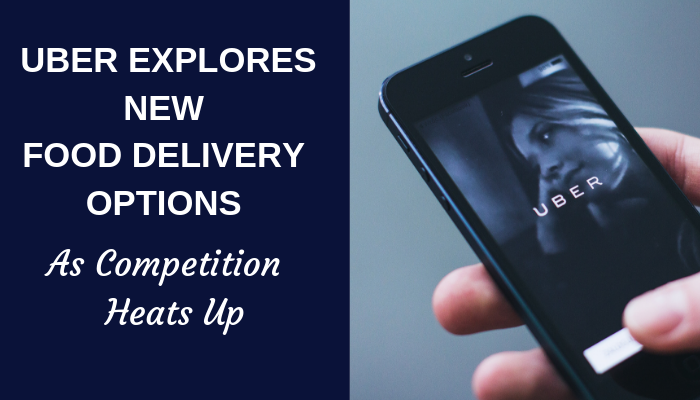 Uber is looking to new food options for its delivery service as Uber Eats was a bright spot for an otherwise disappointing set of second quarter 2019 results, reported The Financial Times (Aug. 9).

Uber reported a $5.2 billion quarterly loss, but Eats revenues jumped 72% year-on-year to $595 million and monthly users grew over 140%. Restaurant selection continues to improve, reaching 320,000 partners at the end of the second quarter.

Jason Droege, head of Uber Eats, wants to seize a new opportunity in local online services. "There is a bit of an e-commerce 'moment' that is happening at a local level. That's a lot of what we are investing behind here," Droege said.

The company is looking to use its network of four million drivers to fill the gap between ordering from Amazon-style warehouses and traditional grocery delivery services.

"Eats, in one way, is a restaurant delivery service. In another way, we are solving customers' dining needs," said Droege. "If you abstractly think about it that way, grocery stores and restaurants are serving a lot of the same needs."

In Australia, Uber expanded a trial with local supermarket group Coles, offering both cooked meals and staples from a store in Sydney. Now, it is in talks with supermarkets in Europe and North America, including the UK's Sainsbury's, about delivering groceries and prepared meals.

Additionally, the company piloted online storefronts for consumer foods groups, including Nestle and Unilever, in Belgium and Brazil. Cinema chains in Australia and Canada are delivering fresh popcorn through Uber Eats to customers who prefer to watch movies at home.

"I think that actually the conversations we've had with some of these potential partners have been really encouraging in terms of how to work together to bring them online," said Droege.

Restaurant-food delivery competition is continuing to grow as Uber Eats rivals such as Europe's Deliveroo and DoorDash in the U.S. raise billions in new capital.

DoorDash is in talks with banks about arranging a credit facility of about $400 million ahead of a possible IPO, according to people familiar with the matter reported The Seattle Times (Aug. 8). The San Francisco-based company may seek offer shares as early as next year and JPMorgan Chase & Co. is leading the potential financing ahead of the IPO, the sources said.

DoorDash is valued at $12.6 billion after raising $600 million from investors in May and it recently revealed it would be buying Square Inc.'s food delivery service, Caviar for $410 million.

Meanwhile, restaurant-delivery company Waitr is considering becoming privately held once again, among options including a sale or merger, reported The Advocate (Aug. 8).

Options include, "continuing to execute the company's business plan, including an increased focus on certain standalone strategic initiatives, the disposition of certain assets, a strategic business combination, a transaction that results in private ownership or a sale of the company, or some combination of these," according to a company report.

The company named Adam Price CEO, replacing Chris Meaux, who will remain chairman of the board and focus on long-term strategy. The new CEO revealed that the company lowered financial expectations through the end of the year.

"Given delays in the roll-out of our planned revenue initiatives, the additional time needed to integrate the Bite Squad merger, as well as current competitive dynamics, we are lowering our full year 2019 revenue guidance to a range of $210 to $220 million," Price said