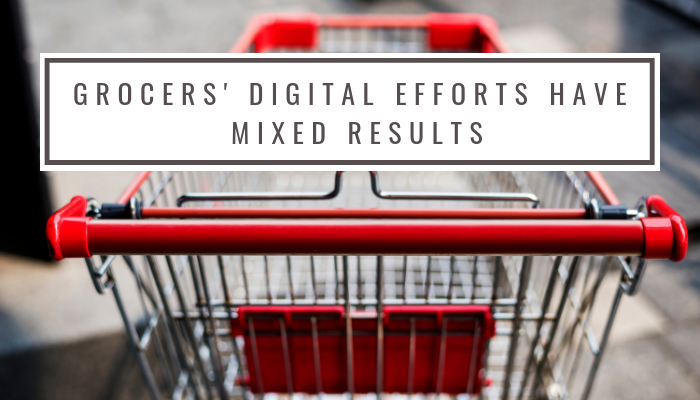 Food sellers are racing to keep up with competition from Amazon.com and Walmart, as well as discount chains like Aldi.

Ever since Amazon's acquisition of Whole Foods, grocers started increasing their tech investments to compete. Some companies have been posting strong profits, such as Target, reported The Wall Street Journal (March 7). The retailer's digital sales rose 31% during the fourth quarter of 2018, while business in-store increased 3%.

This was Target's best year in over a decade, with a strong holiday shopping season, reported CNN Business (March 5). Sales at stores open at least a year grew 5% in 2018, the company's best since 2005.

"We have built a successful, durable model," Target CEO Brian Cornell told investors. "Every piece of our strategy is working."

At about 1,000 locations, customers are able to drive up and have packages brought out to their cars. Online shoppers can go to any Target store and pick up purchases the same day at no extra cost. Additionally, the company remodeled more than 300 locations last year and plans to improve 300 more in 2019, with the goal of having overhauled over 1,000 by the end of next year, reported USA Today (March 5).

Target stands out from overall weaker-than-expected sales in the industry during the holiday season. It is among the retailers doing well in improving their stores, lowering prices and speeding up online supply chains, but some are struggling to stay relevant, said CNN.

"As the shakeout in our industry continues, the separation between those who can afford to invest and those who can't is real," Cornell said.

Meanwhile, shares of Kroger fell after it released a disappointing fiscal 2019 outlook, according to WSJ. The grocer invested hundreds of millions of dollars in online operations that are weighing on profitability as it faces pressure to keep prices low.

Kroger's shares suffered some of the steepest drop in investor stocks after it was revealed that Amazon is planning to launch urban grocery stores.

"We understand we have our work cut out for us," CEO Rodney McMullen said in an interview.

Kroger's digital sales rose 58% during its most recent fiscal year, and the company is offering delivery or online pickup at 91% of its stores. Mr. McMullen said Kroger's product quality, improved digital offerings and extensive network of stores are helping it compete with Amazon and other retailers. The company operates almost 2,800 stores in 35 states and Washington, D.C.

Additionally, Kroger's margins took a hit during its most recent quarter because it sacrificed profit to keep prices down.

The company's investments in its online operations include taking a stake in UK robotics grocer Ocado Group PLC, which is building its first U.S. network of automated warehouses for Kroger, according to WSJ. In its most recent fiscal year the company invested $589 million in Ocado as well as Home Chef, a meal kit service.

Kroger is pledging to generate $400 million in operating profit by next fiscal year, partially by diversifying its sources of revenue. The grocer is selling its consumer data to suppliers, as well as selling more ads to target shoppers.

Target is trying to diversify revenue and compete with Amazon by similar means. It is pitching brands to buy access to consumer-shopping data and to sell ads on their websites.