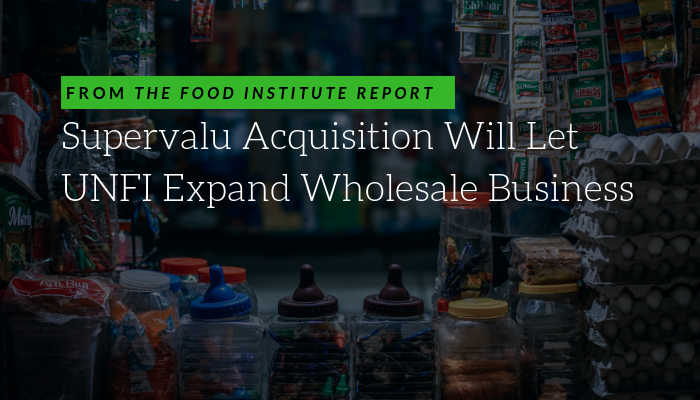 United Natural Foods Inc. (UNFI) expects the addition of Supervalu to add significant scale by expanding and diversifying its customer base while extending its geographic reach.

“Our operating environment continues to evolve rapidly, and we believe that the acquisition will better help us meet the growing needs of our customers,” said UNFI’s chairman and CEO Steve Spinner on a fourth-quarter earnings call Sept. 20.

UNFI expects the addition of Supervalu’s high-growth perimeter categories, such as meat and produce, to its natural and organic products will create more cross-selling opportunities. By the third year after the acquisition, UNFI run-rate cost synergies will likely be more than $175 million.

“With over $3 billion in fresh produce and protein sales across the U.S., in addition to UNFI’s center store expertise, the company will have built out its store offering to give customers access to a wider variety of products,” Spinner said.

The combined companies will have over 60 distribution centers and offer 250,000 SKUs and more than 5,700 private-label brands to over 45,000 customers, including in-store and general administration back-of-the-house programs to retailers.

The Supervalu integration will help the grocery distributor reduce its dependence on Whole Foods Market, which currently accounts for 37% of UNFI’s business and has a contract with the distributor set to expire in 2025.

Once the integration is complete, Supervalu’s wholesale business with independent and regional grocers will likely represent 45% of UNFI’s sales, Unified Grocers and Associated Grocers Of Florida’s distribution units will account for 18%; and Supervalu’s wholesale business with The Fresh Market will contribute as well. This redistribution will reduce  Whole Foods’ piece of UNFI’s total sales to 18%.

“We’ve been hard at work on Supervalu’s integration planning, and we feel really good about the progress that we’ve made so far,” said Sean Griffin, UNFI’s COO and Supervalu’s incoming CEO. “Wholesale is our core competency at United Natural Foods, and we think we’re pretty good at it. Supervalu has great expertise in high-velocity SKUs and other high-growth perimeter categories such as meat, deli and produce.”

Divesting Supervalu’s retail assets is a key element of the acquisition.

Supervalu is already at work on the process with the sale of Farm Fresh. Additionally, the company sold 19 of its 36 Shop 'N Save grocery stores in the St. Louis market to Schnuck Markets, noting the 17 remaining stores will close by the end of 2018 if not sold. As part of the deal, Supervalu will act as the primary supplier for nine of Schnuck’s existing stores in northern Illinois, Iowa and Wisconsin, and the company will close a St. Louis-based distribution center.

UNFI will maintain supply agreements with some of the potential buyers of Supervalu’s retail operations, depending on the retail banner.

“In the locations where we need the capacity, we will be more willing to separate the supply agreement from the sale of the asset,” Spinner said.

“We have a couple of markets in the U.S. that are at capacity,” Spinner noted. “When a customer says, ‘we’d love you to do some additional distribution,’ our answer unfortunately has to be you’re going to have to hold until we have some capacity within that market. But with the addition of the new distribution centers, we no longer have that issue.”

As the retail world evolves, consolidation is par for the course.

The distribution centers will all likely blend fast-moving and slow-moving products over the next few years.

Some Supervalu customers have a limited selection of UNFI products, so UNFI is targeting a much broader product offering in these particular stores.