Sep 13, 2019
The Summer of Chicken Continues
By Victoria Campisi 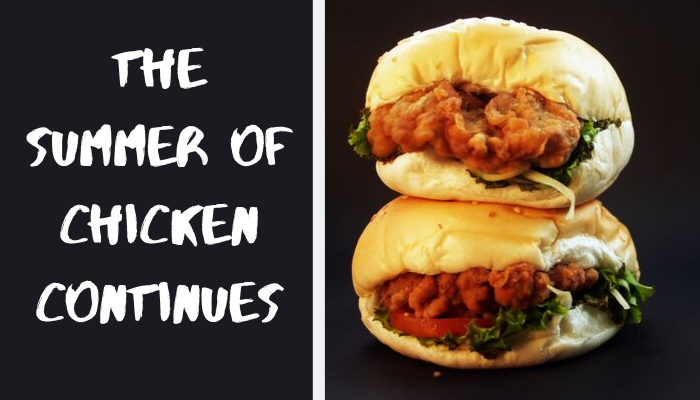 Chick-fil-A reached its goal of serving "No Antibiotics Ever" chicken at all restaurants in the U.S.

The company first unveiled the goal in 2014 and, along with supply partners, Chick-fil-A met the milestone early, serving only No Antibiotics Ever chicken at every restaurant in the U.S. since May 2019. Beginning in October, packaging in restaurants will reflect this.

The commitment allows no antibiotics of any kind to be administered to the chicken within its supply, starting from the egg. No antibiotics can be used in the feed, water, vaccines or other treatments supplied to the poultry sources.

Chick-fil-A is working with USDA to verify its chicken suppliers are continuously meeting the commitment, according to the company's website. Each facility must be re-certified and maintain certification in order to be an approved supplier and supplies must submit evidence of the certification to Chick-fil-A annually.

This comes on the heels of a big summer for chicken. The launch of Popeyes chicken sandwich mid-August and the following Twitter feud brought customers' attention to the already popular chicken sandwich at casual dining chains, according to NPD Group.

Warmer weather, vacations, and a slower pace have historically made summer a stronger season for the restaurant industry," says David Portalatin, NPD food industry advisor and author of Eating Patterns in America. "You add the excitement of a chicken sandwich battle and social media feud, and you've got an even greater gain in transactions - albeit temporary."

The chicken sandwich war drove competition for some sellers, which created a loss in share for some hamburger chains. There was so much consumer interest that Popeyes ran out of its product.

Popeyes is even allowing guests to BYOB: Bring Your Own Bun. Customers can now bring their own buns, order the chain's three-piece tenders and make their own chicken sandwiches on the spot, reported CNN (Sept. 12).

"While we work to get the sandwich back in our restaurants, we wanted to offer our guests a fun way to satisfy their Popeyes sandwich cravings," said Bruno Cardinali, Popeyes' head of marketing for North America.

However, the company promises the coveted sandwich will be back in restaurants soon, although no official date has been released yet.

McDonald's joined the battle for chicken as well with the launch of its spicy chicken sandwich and spicy BBQ chicken tenders, reported Fox News (Sept. 5). The items were tested at several restaurants since the beginning of 2019, according to the company.

Despite the fact that it seems like the new items are a response to Popeyes' addition, rumors that McDonald's was adding spicy chicken items were reported in late June. At that time, the company confirmed the new items were planned for mid-September, but did not provide specific details.