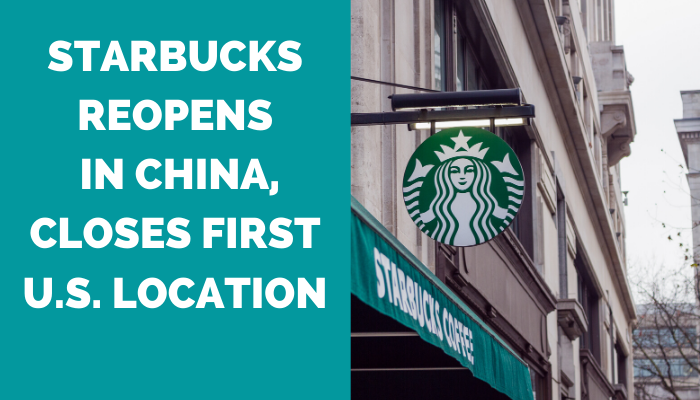 As Starbucks locations reopen in China, closures are beginning in the U.S., leaving many to wonder if this is an early indicator of other company closures to come.

The chain reopened 90% of its stores in China, which were closed due to the coronavirus, under modified hours and conditions, reported China Daily(March 7). The company expects to open about 95% of its stores in China by the end of second quarter of fiscal year 2020, according to Kevin Johnson, president and CEO of Starbucks.

During February, Starbucks China's comparable store sales were down 78% compared with the prior year, primarily due to the temporary store closures, reduced operating hours, and severely reduced consumer traffic. However, as of Feb. 27, the company is seeing early signs of a recovery with sequential improvements in weekly sales.

Stores that remain temporarily closed are heavily concentrated in Hubei province where the outbreak was first reported.

It is possible a similar trend in the U.S. could occur as Starbucks closed a location in Seattle after learning an employee was diagnosed with coronavirus, reported Seattle Times (March 7). The closure is the first related to the outbreak by Starbucks in the U.S., with the employee the first in its workforce to contract the disease.

All 13 employees were placed on 14-day paid quarantines as recommended under guidelines from the U.S. Centers for Disease Control and Prevention, as well as Seattle and King County public health authorities.

Starbucks said the closure and a cleaning were all conducted under guidelines from the City of Seattle and King County public health authorities. The company said city and county officials "encouraged us to reopen the store after further preventative cleaning, which we have already conducted."

Starbucks, as well as McDonald's, stepped up cleaning efforts at U.S. locations to protect against the virus, reported The Wall Street Journal (March 4). Employees at both chains were told to regularly sanitize door handles, chairs, tables, coffee bars, and order kiosks, and Starbucks is restricting customers from bringing their own cups for refills.