May 1, 2018
Smaller Brands are Setting the Pace
By Chris Campbell 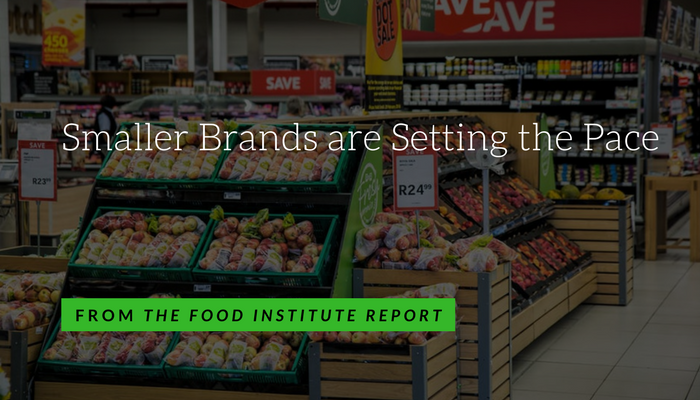 Among the new brands debuting in 2017, 49% of the top-ranking ones came from small manufacturers — defined as those earning less than $1 billion annually — and accounted for 26% of pacesetter dollars, the report found.

Yet the overall list shows “consumers are demanding products that are customized to their needs, and this type of targeted innovation continues to put small and niche companies on the New Product Pacesetter map,” said Susan Viamari, vice president of thought leadership for IRI. “This clearly demonstrates consumers’ willingness to try ‘unknown’ brands.”

Five years ago, almost nine out of every 10 Pacesetters launched were extensions of existing brand lines, Viamari points out. But in 2017, 40% of food and beverage Pacesetters were brands entirely new to the consumer packaged goods market.

“Smaller, more targeted product launches have become the new norm in CPG aisles,” said Larry Levin, executive vice president of consumer and shopper marketing for IRI. “In a testament to the power of this shift, 20% of this year’s top-selling launches earned less than $10 million during their first year on the shelves, continuing a trend we found in last year’s analysis.”

“Millennials, in particular, are more moved by experiences and solutions to their needs and less likely to purchase based solely on brand name,” points out Viamari.

Millennials are willing to spend money on things that matter to them. Of the 20 largest 2017 pacesetter brands, 85% command a price premium compared to the average price of other products in their category, such as LIFEWTR, the report stated.

Wellness and self-care is important to Millennials as well, shown in the popularity of Campbell’s Well Yes! soup.

Yet candy and gum still accounted for 9% of food pacesetter dollars, which is in line with trends seen over the past five years. Healthier sweet snacks like Weight Watchers ice cream treats are becoming more prevalent.