Aug 6, 2019
Could Single-Use Plastics Actually be the Best for the Environment?
By Jennette Rowan 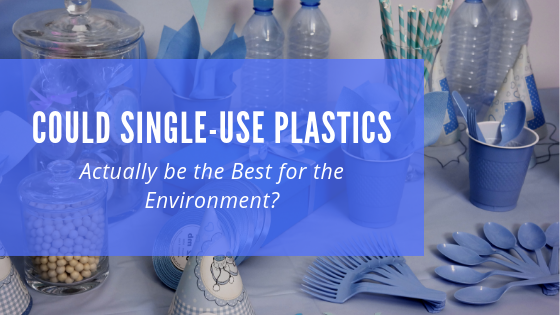 The movement to replace single-use plastics has gained momentum in the past few years, with most restaurants and retailers making an effort to replace plastic bags, cutlery, dishware and straws. However, several reports are beginning to surface that show many of the alternatives are not much of an improvement.

Compostable molded fiber bowls used at fast-casual restaurants contain PFAS, making them unable to biodegrade naturally in the environment, according to the New Food Economy. These bowls have become ubiquitous at salad chains and other "assembly-line" style restaurants, as they are touted as 100% compostable; an obvious improvement over their heavy plastic counterparts.

But New Food Economy's study found the PFAS used in these bowls, which make them able to hold hot, greasy foods without disintegrating, also make them impossible to compost, and may actually ruin other items at the compost center. The chemicals have been tied to a host of health concerns, as well.

The organization tested fiber bowls from 14 locations of eight different New York City restaurants, including Chipotle, Dig Inn and Sweetgreen. All of the samples tested contained high levels of fluorine, which experts say indicates treatment with PFAS compounds. While the plant fibers used to make these products can break down under the right conditions (meaning if they actually get sent to the appropriate composting facilities, which is not a given), these products contain chemicals that stay in the environment forever, ruining compost, tainting soil, and polluting water.

A toxics reduction manager for San Francisco’s Department of the Environment, Jen Jackson, helped to develop the city’s composting rules, including a program that targets restaurant waste. After testing compostable foodware in two city hospitals, she found all of the molded fiber products were fluorinated. Meanwhile, Heather Trim, executive director of Zero-Waste Washington, and Linda Lee, a Perdue University agronomist, developed a study to establish whether compostable food products are adding to the toxic load of the compost created at municipal facilities.

Other efforts to replace single-use plastics at restaurants have been questionable, as well. In 2018, McDonald's was one of many chains to make the shift to paper from plastic straws in an attempt to lower waste. It introduced the straws to all 1,361 McDonald's restaurants in the UK and Ireland. Now, though, the company admitted the paper straws are too thick to be processed by its recyclers. The plastic straws they replaced actually could be recycled, but the British government moved to ban plastic straws by 2020 and encouraged chains to ditch the products, reported CNN (Aug. 5).

Customers have also complained the paper straws are difficult to use and don't hold up after extended use. Diners in the UK even started a petition to bring back the original straws, with one customer calling the change "THE worst decision by McDonalds I can ever recall."

Plastic shopping bags have come under fire, as well, with many retailers replacing them with paper alternatives or stopped supplying bags for shoppers altogether. While the recyclability and biodegradability of paper vs. plastic bags is a bit clearer than straws and fiber bowls, there have been reports that reusable bags may not be as sustainable as they are touted.

A 2018 Danish study found cotton tote bags need to be used 7,100 times to offset their carbon footprint, while polypropylene bags (most of the green reusable bags found at supermarkets) should be used 37 times and paper bags should be used 43 times, reported Phys.org (Aug. 6, 2018). In addition, a 2014 study in the U.S. found reusable low-density polyethylene bags (the thicker plastic bags commonly used in supermarkets) and polypropylene bags do have a lower environmental impact than the usual plastic bags found in supermarkets – but only if they are reused enough times.