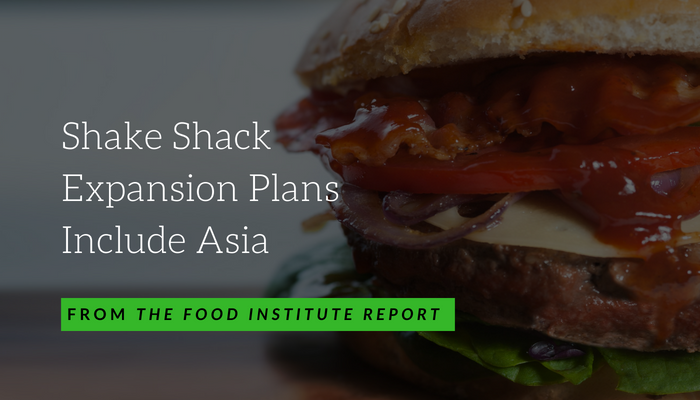 Approximately 20% of Shake Shack’s store openings will launch in new markets, as the remainder broadens the company’s base across existing markets, said CEO Randy Garutti on a second-quarter earnings call Aug. 2. The restaurant chain is keeping to its plan to deliver 200 domestic company-operated locations by the end of 2020 and to achieve its longer-term target of 450 restaurants.

Over the next two quarters, Shake Shack will enter new U.S. markets, including Nashville, Birmingham, AL, Palo Alto, CA, and Seattle. California, especially, is a key market for the company.

Garutti noted that higher labor costs will come with the territory as the chain expands its U.S. presence.

“We have a number of our markets in the most expensive wage rates in America with New York City, California, DC, Chicago and the northeast. All of our major markets are increasing and are going to continue to increase,” Garutti said.

As Shake Shack’s domestic licensing business continues to grow, the company is focused on premier airport destinations, Garutti said. The goal is 120 licensed restaurants by the end of 2020.

Internationally, the restaurant chain expects to open between 16 and 18 licensed locations in 2018, with Asia is a particularly dynamic market for Shake Shack.

“We are very focused on Asia as the primary growth driver for our international business over the next few years,” Garutti noted.

Shake Shack is preparing for the opening of its Shanghai location as it expands into mainland China in 2019, and a Hong Kong location will open in May 2019. The restaurant chain signed a contract extension for an additional 15 locations in Japan through the end of 2024.

In addition, a partnership is in the works with SSI Group to open 15 locations in the Philippines through 2025, with the first location planned for Manila in spring 2019. The agreement aligns with Shake Shack’s strategy of choosing specific global partners to expand the company’s brand and leverage its supply chain.

Shake Shack is innovating around its core menu, testing new categories and menu items. A veggie burger is being tested in 18 locations, mostly in California, New York and Texas.

In September, the company will open an innovation kitchen in New York where it will test new ideas, launch new menu items, innovate around kitchen design and simulate its digital initiatives.

“We believe over time digital as a percent will continue to increase and compelling menu innovations will drive that. You may have some quarters that menu innovation is up as an accretive to that and some quarters, down. But overall, we’re always going to be thinking about menu innovation to drive frequency to drive overall sales. Digital has a big opportunity to go up from here,” Garutti said.

Shake Shack will continue to test new mobile app exclusive offers. Toward the end of the year, the chain will launch browser-based ordering for mobile and desktop, and continue to experiment with kiosk ordering.

The majority of the company’s locations are testing delivery with a few partners. The company may consider a formal delivery partnership or partnerships, Garutti said.

“We’ve got new packaging coming. There’s a lot of different ways we’re thinking about how to get a French fry to your home as well as we possibly can, how to get a frozen shake to your home in a way that you’re excited about it,” Garutti said.

Shake Shack will stop using plastic straws in the U.S. by the first quarter of 2019, reported Food & Wine (Aug. 3). Garutti noted packaging sustainability “remains a larger goal for us as we look ahead.”

The company is joining the ranks of large foodservice chains like Mcdonald’s and Starbucks, who made the no plastic straw pledge as well.