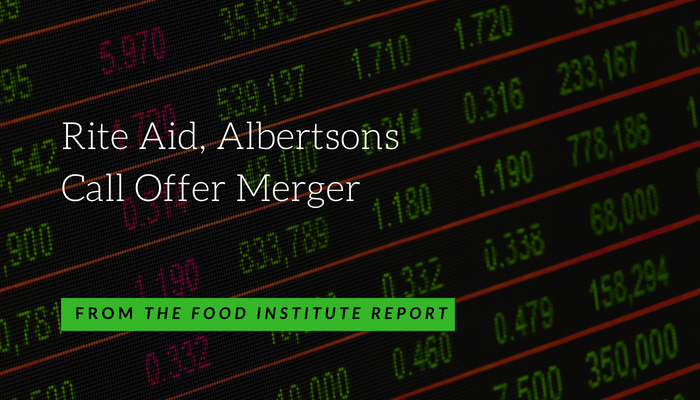 Rite Aid Corp. and Albertsons Cos. terminated their merger agreement Aug. 8, a day before a Rite Aid shareholder vote to approve the deal, reported CNBC (Aug. 9).

The companies mutually agreed to terminate the merger and neither will be responsible for any payments to the other side. The pharmacy and the grocer were unable to structure a deal that sufficiently appealed to investors.

Albertsons disagreed with Rite Aid stockholders and third-party advisory firms that the deal undervalued the drugstore chain and would not alter the terms of the deal.

"While we believed in the merits of the combination with Albertsons, we have heard the views expressed by our stockholders and are committed to moving forward and executing our strategic plan as a standalone company," said Rite Aid CEO John Standley.

The $24 billion deal, announced in February, would have had Albertsons rebrand its in-store pharmacies under the Rite Aid name while continuing to operate some stand-alone Rite Aid pharmacies, creating a company operating about 4,900 stores, 4,350 pharmacies and 320 in-store health clinics across 38 states and Washington, D.C.

Foot traffic to the in-store pharmacies was supposed to help Albertsons raise the number of customers walking through its food aisles.

Critics argued the deal provides Albertsons' private equity owner, Cerberus Capital Management, a vehicle to take the company public without rewarding Rite Aid shareholders in turn. Albertsons was unwilling to renegotiate the terms of the deal.

Rite Aid’s board, meanwhile, tried to convince shareholders that Albertsons’ digital capabilities and financial strength would help the pharmacy chain grow in the face of stiff competition.

The Cerberus group purchased Albertsons from Supervalu in 2013 for about $3 billion. Since 2012, Albertsons has grown to 2,318 stores from  192 stores and annual revenue of $60 billion compared to $4 billion. A big driver of that expansion came in 2014 when Cerberus and other investors agreed to buy Safeway for $9.2 billion.

In The Food Institute's recent webinar "Achieving a self-sustaining business model: Top 3 trends companies need to think about post-COVID-19," Greg Wank, CPA, CGMA, partner and leader of Anchin's food and beverage group, as well as David Eben founder and CEO of Carrington Farms, discussed how to have a more...