May 14, 2020
Restaurant Owners Question if Reopening is Sustainable
By Victoria Campisi 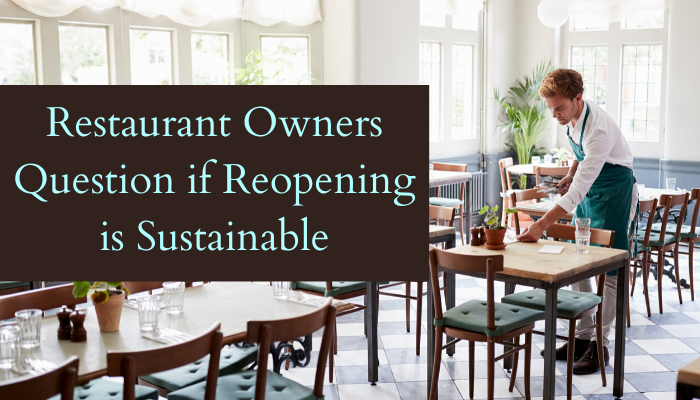 Many noted operating at less than 75% capacity will be unprofitable, while others say it may be virtually impossible to keep 6 ft. between customers, particularly in small bars.“We have the same costs to open at limited capacity and, truthfully, I don’t think the income would be worth it,” said Susan Povich of Brooklyn crustacean destination Red Hook Lobster Pound. “I am not going to open the inside of my restaurant at a 25% or 35% capacity.”

Under the tentative proposal, restaurants and bars would reopen in three phases, finally ramping up to full capacity sometime after Labor Day. Andrew Rigie, head of the NYC Hospitality Alliance, told The Post that these worries have become pervasive throughout the already tenuous restaurant scene.

“There’s a lot of concern that restaurants could open up their restaurant, hire people back, only to learn they don’t have the sales to sustain their business and lay people off again,” said Rigie.

Southern Grounds Coffee Co. reopened its dining room at its San Marco, FL, location, while its Neptune Beach location is currently only allowing seating on its patio. Bold Bean Coffee Roasters is adhering to its curbside delivery model for at least the next few weeks. The owners of both companies cited limited seating and safety of staff and guests as factors in their consideration to open in-store seating.

Southern Grounds operating partner Mark Janasik said that while the San Marco location is open with 25% capacity seating, the coffee concept is holding off on doing the same for its Neptune Beach location due to its smaller seating capacity. Bold Bean Coffee Roasters' managing partner Zack Burnett said Bold Bean retail locations likely won't open up until June, adding the company is tentatively planning to reopen their locations for on-premises service on June 1, but that date isn't definite.

Some owners also have concerns about the effect on ambiance while serving food in a fine-dining setting wearing gloves and masks. “The experience of dining with masks and gloves and 6 ft. from your neighbor, I don’t think it’s an attractive option,” said Povich.

Union Square Hospitality Group's Danny Meyer expects his dining rooms will remain closed until a vaccine is released, reported Crain's New York Business (May 14). The group plans to open quick-service locations first, and to start shipping a signature dish from each restaurant across the country via Goldbelly. The restaurateur is also considering the possibility of outdoor dining.

Additionally, Potbelly Sandwich Shop is contemplating closing up to 100 locations. At the start of 2020, the chain was on pace to record its first positive quarterly comp since fourth quarter 2016, but it then saw same store sales drop 68% in March. The company temporarily closed 36 company-operated shops and furloughed one-third of its corporate employees.

“The pandemic dramatically impacted our sales and oriented our priorities first around the health and safety of our employees and customers, and second, toward aggressively protecting our balance sheet," said Alan Johnson, CEO of Potbelly Corp.

Meanwhile, food delivery companies are still struggling to profit, reported The Wall Street Journal (May 13). Companies including Grubhub and Uber Eats are losing money on delivery orders or barely breaking even. The companies also said they aren’t sure how many diners will stick with delivery after stay-at-home orders are relaxed.

Although sales are growing, according to the companies and credit card data, increased costs to fund promotions and safety equipment and pressure to reduce commissions have created an even worse financial proposition for food delivery companies.

The Trump administration released the names of Payment Protection Program (PPP) borrowers for the first time, reported The Wall Street...