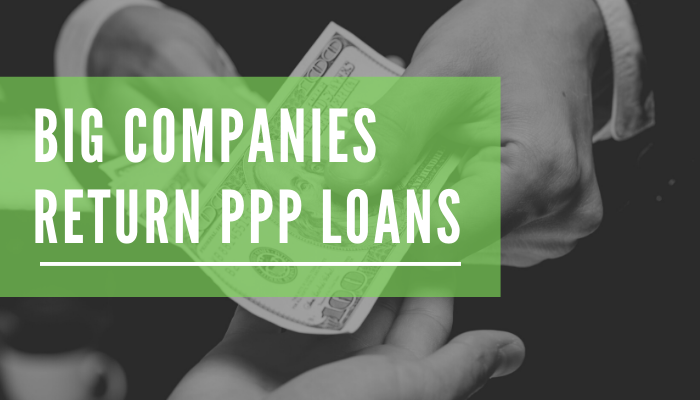 Analysis of SEC records found more than 80 publicly traded companies, including some restaurant chains, secured money under the first tranche of PPP payments. Some of the companies are worth hundreds of millions of dollars based on their share values, with many of them paying executives seven-figure compensation packages.

The SBA’s original $349 billion Paycheck Protection Program contained a vague requirement that businesses certify that “current economic uncertainty makes this loan request necessary.” The new guidance is more explicit and said companies with other sources of cash probably would not qualify.

“All borrowers must assess their economic need for a PPP loan under the standard established by the CARES Act and the PPP regulations at the time of the loan application,” the guidance states. “Borrowers still must certify in good faith that their PPP loan request is necessary.”

The new guidance states borrowers “must make this certification in good faith, taking into account their current business activity and their ability to access other sources of liquidity sufficient to support their ongoing operations in a manner that is not significantly detrimental to the business.”

The fund will be replenished as the House approved a $484 billion coronavirus aid package in a 388-5 vote April 23, moving the bill to President Trump for approval, reported Arizona Republic (April 24). The bill will provide $320 billion to the PPP, $75 billion to hospitals, and $25 billion to testing efforts.

Since the news broke that many large corporations received loan payments and sparked criticism from small business advocates, several companies have returned funds. Among them was Shake Shack, which revealed it was returning its $10 million PPP loan.

Danny Meyer, the CEO of Union Square Hospitality Group and founder and chairman of Shake Shack, noted it would not accept the money until "every restaurant that needs it has had the same opportunity to receive assistance." It urged that certain changes be made to the loan program, such as adequate funding, assigning each applying restaurant to a local bank, and eliminating the June forgiveness date.

Sweetgreen and Kura Sushi USA are also returning their funds received from the SBA's stimulus package, reported Bloomberg (April 23). “As soon as we realized it ran out and so many people didn’t get funding, we realized it wasn’t worth it. We immediately returned it,” said Jonathan Neman, CEO of Sweetgreen. The restaurant chain received a $10 million loan.

Kura Sushi, a restaurant chain with 25 locations in five U.S. states, is giving back about $6 million in proceeds, according to a regulatory filing. The company's CEO noted it returned the loan when it became aware that the funds wouldn’t be enough for everyone because it is able "to weather financial hardship for a longer period than independent restaurant owners."

Meanwhile, Ruth’s Hospitality Group Inc. will refund the $20 million loan it received, reported The Wall Street Journal (April 23). The company said it had applied for the funds to keep as many workers employed as possible and cover their health benefits. CEO Cheryl Henry said it always intended to repay the loan, but returned it now given that the fund dried up so quickly.