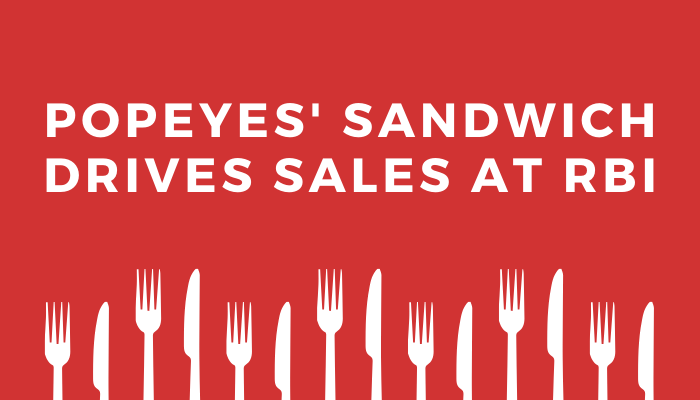 "Burger King delivered its strongest year of restaurant growth in the last two decades. Popeyes launched an iconic chicken sandwich that has proven to be a game changer for the brand in every way," said CEO Jose Cil.

Popeye's chicken sandwich helped its same-store sales grow 34% during RBI's fourth quarter, reported CNBC (Feb. 10). The chain introduced the viral sandwich in August, but it sold out before the end of the month and was reintroduced in November.

Traffic at Popeyes spiked after the reintroduction, and it remained above average through January, according to Placer.ai. Placer.ai found traffic was 20% above what the chain experienced in a typical week through all of January, and reported traffic rose at triple-digit levels after the sandwich was reintroduced, reported Forbes (Feb. 3).

However, Tim Horton's lagged behind Popeye's and Burger King with same-store sales declining by 4.3% during the quarter.

"At Tim Hortons, our performance did not reflect the incredible power of our brand and it is clear that we have a large opportunity to refocus on our founding values and what has made us famous with our guests over the years, which will be the basis for our plan in 2020," said Cil.

The chain will spend the coming year focusing on "fundamentals" to fix lagging performance in Canada, according to the company.

Meanwhile, it was revealed in December that Tim Hortons president Alex Macedo will step down in March and Axel Schwan, Tims' regional president for Canada and the U.S., will oversee the Latin America region as well.