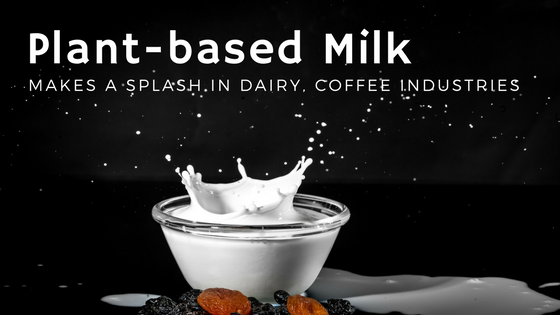 Plant-based milks are making quite a mark in the dairy industry. The sector has moved past classics like soy and almond milk, and into more unique offerings like cashew, hemp, banana and pea dairy alternatives. Radiant Insights attributes the popularity of these products to a rise in the investments by leading manufacturers, rising cases of lactose intolerance and allergies, preferences towards vegan and plant-based food, and an increased awareness of health and wellness concerns.

U.S. non-dairy milk sales grew 61% since 2012, and are estimated to have reached $2.1 billion in 2017, according to Mintel. While almond, soy and coconut still hold the highest market share, new non-dairy milk types are starting to compete. Two thirds of those who purchased pecan milk say they bought more pecan milk in 2017 than in 2016, while 58% of quinoa milk consumers say they bought more quinoa milk in 2017 than the year prior.

Despite this increased interest in non-dairy milks, Mintel found nearly all non-dairy milk consumers also purchase dairy milk. However, non-dairy milk buyers look for more factors in dairy milk, like milks that deliver on flavor, vitamins and minerals, and are high and protein, as well as ones that are organic and natural. Still, nearly one in five Americans say they are consuming less dairy for health reasons.

These consumer sentiments may explain the success of one of the latest entrants into the space, oat milk. It has become particularly popular among baristas, as it is said to have a creamier texture than other plant-based milks, and works well to create foams and latte art. It has gotten so popular that some coffee shops have been struggling to keep up with demand, and were left without the milk for days, or even weeks, due to its popularity, reported Bloomberg (April 13).

Swedish oat milk producer Oatly Inc. makes its oat milk by mixing oats with water and milling the soft mixture, according to its website. It then adds natural enzymes that break the oat starch down into smaller components, which sweetens its products naturally. During the separation, it removes bran, which leaves the loose fiber, or beta-glucans. It also pasteurizes the product prior to packaging to extend the shelf life.

A Bloomberg Intelligence analyst predicts Oatly could become a takeover target, citing possible buyers such as PepsiCo Inc., which own the Quaker oats brand. Oatly is working to increase its U.S. output by 50% by summer 2018 to help meet demand. Oat milk is now offered at more than 1,000 coffee shops nationwide and is moving onto retail shelves. About 13% of drinks at Intelligentsia cafes are now made with oat milk, for which customers pay a 50-cent premium over dairy milk.

Ripple effects from the coronavirus pandemic are putting pressure on farmers, according to the American Farm Bureau Federation (AFBF).

Despite strong demand for basic foods like dairy products amid the coronavirus pandemic, the milk supply chain is experiencing disruptions that are preventing farmers from getting their products to market, reported St. Louis Post-Dispatch (April 3).