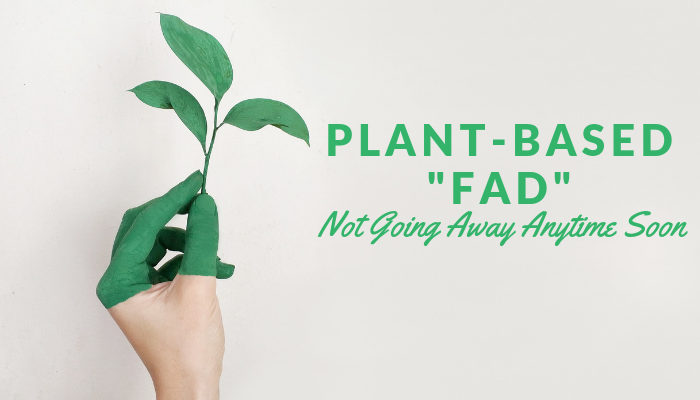 The plant-based food and beverage industry is continuing to evolve and the market continues to see growth, recently getting attention from new companies who are developing their own plant-based products.

We've already established that plant-based protein is currently one of the hottest topics in the food industry, and now we are seeing more and more companies adopting the idea and producing meat-alternative products. The growth of vegan diets and demand for low-calorie options has the global plant-based beverages market estimated to be valued at $11.2 billion in 2018 and projected to reach $19.7 billion by 2023, according to a Research and Markets report.

In recent years, the plant-based beverage and meat alternative markets have gotten the attention of brands due to their growing popularity with consumers. Concerns about meat and dairy - including health, animal welfare and the environment - are driving a $3.7 billion plant-based market, according to Bloomberg (Oct. 22).

"In 2018, we saw the sales of plant-based foods grow by 20%," said American Customer Satisfaction Index President David VanAmburg. "These aren't fads; customers want to adhere to a healthier lifestyle and they're more satisfied with brands that offer those options."

One of the latest companies to show interest in the market is one actually known for their meat products. Natural and organic meat company Applegate Farms, a subsidiary of processed meat giant Hormel Foods Corp. is thinking about developing their own plant based products.

Applegate President John Ghingo said in an interview with Bloomberg that the brand is "always looking for better solutions," and making progress. He made clear that the company would be staying committed to its core product line, but that plant-based alternatives are "a really interesting space."

The company would be joining brands such as Beyond Meat, which is widely available at grocery stores and some restaurants, as well as Impossible Foods known for its "Impossible Burger" which is made of veggie meat that actually "bleeds."

On Oct. 24, Greenleaf Foods SPC, unveiled its launch as a food company "dedicated to cultivating and advancing leadership in the fast-growing plant-based food sector." The company will operate as a wholly-owned independent subsidiary of Maple Leaf Foods and it plans to build a portfolio of brands and products, offering consumers more plant-based food choices.

Greenleaf believes that plant-based foods are vital for the health of people and our planet and is committed to growing the category. Its portfolio currently includes two of the leading plant-based brands in the United States, Lightlife Foods and Field Roast Grain Meat Co.

"We have established leading brands that are known for delicious, high-quality products and we are excited to build on and invest in that expertise to drive innovation and accelerate our growth," said Dan Curtin, President of Greenleaf. "Leadership in the fast-growing plant-based protein market is fundamental to pursuing Maple Leaf Foods' broader vision to be the most sustainable protein company on earth."

In Technomic's Take: 7 Key trends for 2019, it ranks plant-based dining and says that it "now means more than just swapping meats for veggies; it represents a strategy that includes zero waste policies and a wider focus on sustainability." With restaurants starting to ban plastic straws and making plant based food packaging a priority in an eco-friendly effort to eliminate waste and pollution, we have to wonder what changes will be next.

Kroger also lists plant based foods in its Top Food Trends for 2019. It said "consumers are finding it easier than ever before to incorporate more plant-based fare into their daily diets." According to Mintel's Protein Report, 2017, 31% of consumers said they had participated in meat free days once per week, e.g. Meatless Mondays.

French food company, Danone, has been making more effort to attract younger consumers using products with plant-based ingredients, as well as with other fast-growing categories, probiotics and protein. Francisco Camacho, executive vice president for Danone's 'Essential Dairy and Plant Based' business said he expects to triple the size of the plant-based business to 5 billion euros ($5.75 billion) by 2025.

Like VanAmburg said, plant-based diets don't seem a "passing fad." Increasingly becoming popular and accepted by many, it seems as though they will only continue to grow from here on out.