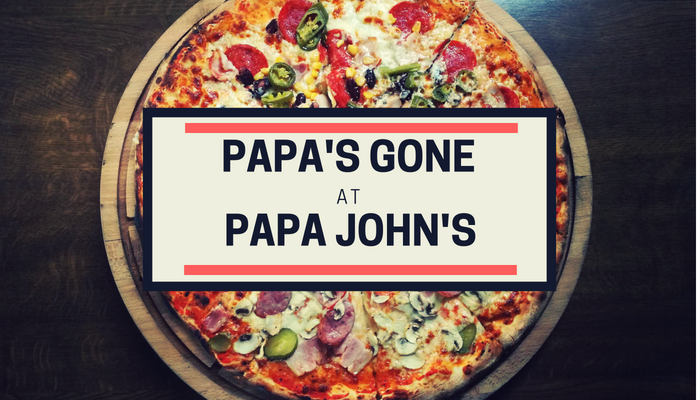 At Papa John's, Papa is gone. But will it stay that way?

A little history lesson will be useful in this discussion. In November 2017, Papa John's founder and then-CEO John Schnatter blamed sluggish sales at the company on "poor leadership" with its partner, the National Football League, during the height of the national anthem debate. By the end of December, Schnatter had stepped down as CEO, to be replaced by COO Steve Ritchie on New Year's Day 2018, but remained chairman of the board, reported The Washington Post (Dec. 21, 2017).

Things seemed quiet, until a July 11 article from Forbes appeared alleging the founder used racially-insensitive language during a conference call with marketing agency Laundry Service in May. The call was arranged to help Schnatter prevent future public relations issues. Laundry Service reportedly terminated its contract with the company following the call, and Schnatter later confirmed the report. "News reports attributing the use of inappropriate and hurtful language to me during a media training session regarding race are true," he said.

Most importantly, Schnatter resigned from his position as chairman in the aftermath of the uproar caused by the Forbes article. Less important, but still noteworthy, the company began to remove the founder's image from all of its marketing materials, following a decision from the company's top executives, reported CNBC (July 13).

However, within days, news began circulating that Schnatter would legally protest his resignation. These reports appeared true as Papa John's International Inc. adopted a shareholder rights plan with a 15% trigger to deter existing stockholders from amassing a controlling stake in the company. The plan intended to protect the interests of the company and its stockholders by reducing the likelihood of gaining control of the company through open market accumulation or other tactics without paying an appropriate control premium, reported Reuters (July 23).

Following this, Schnatter filed a lawsuit against the company, seeking access to documents related to his departure. The lawsuit claims the documents will demonstrate directors either "acted without adequate information and breached their duty of care," or "planned [a] coup in advance." Papa John's denied Schnatter's claims, and plans to give Schnatter "all of the materials he is entitled to as a director," reported Fortune (July 27).

The court system will let this issue play out, and you can be sure the Food Institute will keep an eye on the proceedings. But I think it's important to note the interesting irony in the sluggish sales that started this issue in the first place. The company reported North American system-wide comparable sales decreases of 3.9% and 5.3% in the fourth quarter of 2017 and the first quarter of 2018, respectively. The company is expected to release its second quarter results Aug. 7, and I'm sure many are expecting sales to decline, again.

This prediction is backed from reports on the ground. Forbes spoke with an employee at a franchise-owned location in northern New Jersey July 30, who expressed his concerns about how empty the store had been in the wake of the controversy. Three major franchisees reported sales dropping in the double digits in July, with two noting system-wide revenue the week of July 30 to be down 12% when compared to the prior year.

Supermarkets' full-year operating margins will probably be flat due to higher labor and logistics bills, according to Bernstein, reported The Wall Street Journal (April 1).

Goldman Sachs Group Inc. expects the U.S. economy will shrink an annualized 34% in the second quarter, and unemployment will soar to 15% by midyear, reported read more