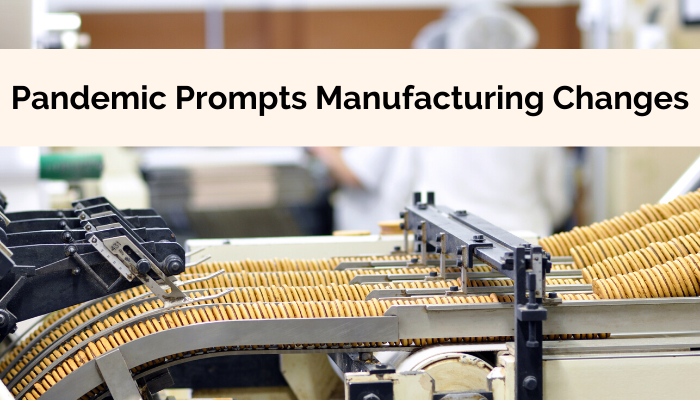 The coronavirus pandemic may spur manufacturing changes, according to PepsiCo CFO Hugh Johnston.

Going forward, companies may carry a bit more inventory and be even faster to respond, reported Bloomberg (April 28). “Many of us have run supply chains and inventory levels more leanly than five to 10 years ago,” said Johnston.

PepsiCo is seeing repeat purchases of Quaker Oats, Tostitos, and other products, displaying that consumers aren't just stockpiling. “I think there might be something of a bigger change and shift back to bigger brands," Johnston added.

The company is still staying cautious, according to CEO Raymond Laguarta, since "potential second waves" could affect a return to regular sales patterns. Pepsi withdrew its fiscal 2020 forecast due to questions around the timing of these events.

“The key uncertainty that we are facing is around timing and when consumers may shift back to restricted recovery and a new normal,” Laguarta said.

Laguarta noted that sales at gas stations and convenience stores are expected to pick up once consumers begin returning to work, while restaurants, movie theaters, and sports stadiums will take longer to bounce back.

Meanwhile, Hershey's c-store sales are down, reported CSP Daily News (April 27). C-stores account for about 15% of Hershey’s sales, and c-store sales are declining about 10% amid the coronavirus outbreak, according to CEO Michele Buck.

“The situation continues to evolve so rapidly that it's difficult to predict the future with much certainty. While comparisons can certainly be drawn to weather-related disruptions or natural disasters or recessions, the reality is that we have never seen so many factors at play at the same time on such a global scale,” Buck said.

However, Hershey syrup, baking chips, and cocoa grew about 30% during March as families spent time at home baking, Buck said. Skinny Pop and Pirate’s Booty also grew about 20%, while gum and mint categories were down by about 40% to 50% in the past several weeks.

Hershey is looking to divest its Krave jerky and Scharffen Berger and Dagoba chocolate brands, a move meant to better prioritize resources against assets that fit the company's business model and scale capabilities.

At Mondelez, the company is also experiencing continued growth in snack sales after consumers stocked up at the beginning of the pandemic, reported CNBC (April 28). “Originally, you would have said this was pantry loading, but this has now been going on for more than six weeks. And unless consumers are building a warehouse for Oreos at home, I think they are eating it,” said CEO Dirk Van de Put.

There was an initial spike in North America as more states and cities issued stay-at-home orders, leading to weekly sales growth of around 30%, stated Van de Put. Although that pace has tapered off, sales in the category are still growing in the high single digits, above pre-crisis levels.

“A lot of the out-of-home eating has now gone in home, and that leads to more snacking...the second thing is that sharing a snack with your family, with your kids brings a feeling of comfort,” Van de Put said.

Like Pepsi, Mondelez withdrew its full-year guidance, citing uncertainty about its business impact of the pandemic, but the CEO thinks the company could still continue to experience growth.