Sep 23, 2019
Rapid Growth for On- and Off-Premise Dining
By Victoria Campisi 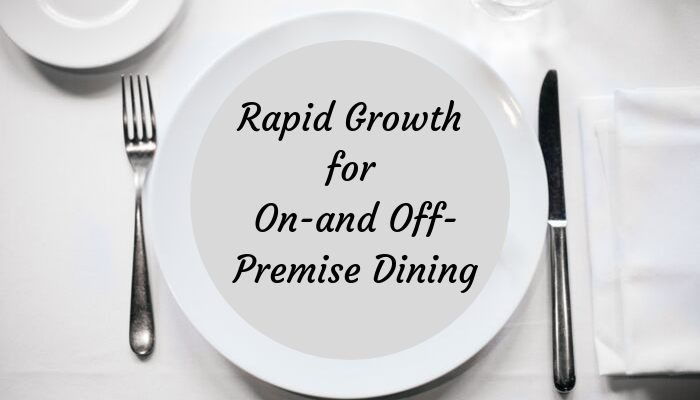 About half of U.S. adults would like to be using takeout and delivery more frequently, according to the National Restaurant Association.

Concurrently, 42% of adults are not eating on premises at restaurants as often as they would like. Levels of demand are generally consistent for Millennials and Gen Xers, with similar proportions desiring to use on-premises and off-premises options more frequently at 42% and 43% respectively.

However, Baby Boomers are more likely to express interest in boosting their off-premises spending. Fifty-one percent of Boomers aren't purchasing takeout or delivery as often as they would like, while 38% responded similarly about on-premises dining.

One company who is taking advantage of demand for both on-and off-premise dining is Sweetgreen. The company raised $150 million in financing to launch its app-based delivery program and set up more designated delivery locations in office buildings, reported The Wall Street Journal (Sept. 20).

The move puts Sweetgreen in the same category as delivery apps that have raised venture funding, such as Postmates Inc. and DoorDash Inc. However, Sweetgreen will focus on delivering its own food, while remaining on Uber Eats and other delivery apps.

The average food delivery consumer has two delivery apps and uses them three times per month, according to US Foods. The most popular app is Uber Eats. Grubhub, DoorDash and Postmates round out the top four.

Jonathan Neman, Sweetgreen's co-founder and CEO, said most purchases at its 97 restaurants are made through its smartphone app. He said he expects that to continue when the company begins offering deliveries through its app in 2020.

The company also plans to use the new capital to open new retail locations in Miami; Denver; and Austin, Texas.

Meanwhile, after posting steady growth during the first seven months of 2019, restaurant sales declined in August, according to preliminary figures from the U.S. Census Bureau. Eating and drinking place sales totaled a seasonally-adjusted $64.1 billion in during the month.