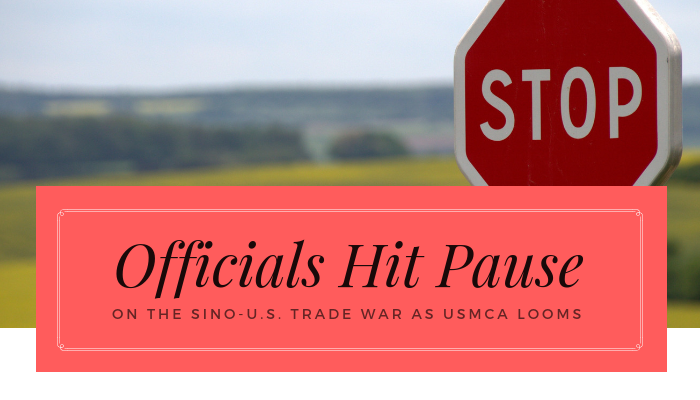 It's certainly not over, but farmers and food producers may receive a few months' respite as tariffs in the Sino-U.S. trade war will not escalate for 90 days. Additionally, they can at least look forward to a new normal as the United States-Mexico-Canada Agreement (USMCA) moves forward to full ratification.

The U.S. and China reached an agreement to stay any tariff increases for 90 days, according to the Trump Administration. The agreement will keep a 10% tariff on the $200 billion worth of Chinese goods that were to experience a tariff rate hike to 25% on Jan. 1, 2019 as the countries negotiate further, reported NPR (Dec. 2).

"China will agree to purchase a not yet agreed upon, but very substantial, amount of agricultural, energy, industrial, and other product from the United States to reduce the trade imbalance between our two countries. China has agreed to start purchasing agricultural product from our farmers immediately."

Considering the U.S. farm belt was the first target China locked onto in the escalating trade war, on the surface, this appears to be a big win for the Administration. As we've previously reported in The Food Institute Blog and our other channels, U.S. producers of pork, red meat, fruits and nuts were among the hardest hit by the retaliatory tariffs instituted by China. What was once a developing market for these producers was effectively shuttered, so any opening for increased exports could be celebrated.

"This is the first positive news we've seen after months of downturned prices and halted shipments," said John Heisdorffer, a Keota, IA-based farmer and president of the American Soybean Association. "If this suspension of tariff increases leads to a longer-term agreement, it will be extremely positive for the soy industry," reported Minneapolis Star Tribune (Dec. 4).

However, some farm groups are arguing that it is too little, too late, for markets that have been affected by the trade war. Nebraska farmers lost upward of $1 billion in revenue from ongoing trade conflicts, according to the Nebraska Farm Bureau. The state's farm revenues are down between $695 million to $1 billion so far in 2018, roughly 11% to 16% of the export values of Nebraska agriculture goods in 2017. Commodities most affected are corn, soybeans and pork, reported Omaha World-Herald (Dec. 4).

Optimism was tempered in Iowa, as well. "The markets aren't overly excited. They're like most of us in thinking, 'Yes, it's positive, but there are very few details,'" Iowa Soybean Association Kirk Leeds said. Mr. Leeds noted the Chinese media hadn't reported that the country plans to make any substantial purchases, reported Des Moines Register (Dec. 4).

Additionally, agriculture is not the sticking point of the conversation, so any gains could be eliminated if the 25% tariffs are instated after the negotiating window, as intimated from the White House press release on the topic:

"President Trump and President Xi have agreed to immediately begin negotiations on structural changes with respect to forced technology transfer, intellectual property protection, non-tariff barriers, cyber intrusions and cyber theft, services and agriculture. Both parties agree that they will endeavor to have this transaction completed within the next 90 days. If at the end of this period of time, the parties are unable to reach an agreement, the 10% tariffs will be raised to 25%."

Meanwhile, the U.S., Canada and Mexico agreed on the U.S. Mexico Canada Agreement (USMCA) as the countries' leaders signed the pact at the G-20 Summit in Buenos Aires. The deal will require ratification from the countries' legislatures before taking effect, reported NPR (Nov. 30).

As the deal will require congressional approval to take effect, some analysts believe a Democratic House could cause issues for the incumbent administration. However, President Trump noted he would use his authority to cancel NAFTA, effectively giving Congress a choice between the USMCA or a pre-NAFTA trade landscape.

Canadian Prime Minister Justin Trudeau said the USMCA "lifts the risk of serious economic uncertainty that lingers throughout a trade renegotiation process — uncertainty that would have only gotten worse and more damaging if we had not reached a new NAFTA."

Mexican President Peña Nieto noted the pact includes provisions for e-commerce and informational technology, subjects that were not included in NAFTA. "In fact, one-third of the agreement includes topics that were not included in the first agreement," he said. Additionally, he said the USMCA "is the first trade agreement that incorporates elements that address the social impact of international trade; it enables the participation of more sectors in the economy."

With the North American front of the trade war closed, Washington can focus its efforts on negotiations with China. However, they would be wise to not let any progress linger, as it appears China is not. Argentina and China signed more than 30 agriculture and investment deals at a state visit following the G-20 summit. China is among Argentina's top export markets for its agricultural commodities, reported Yakima Herald-Republic (Dec. 2).