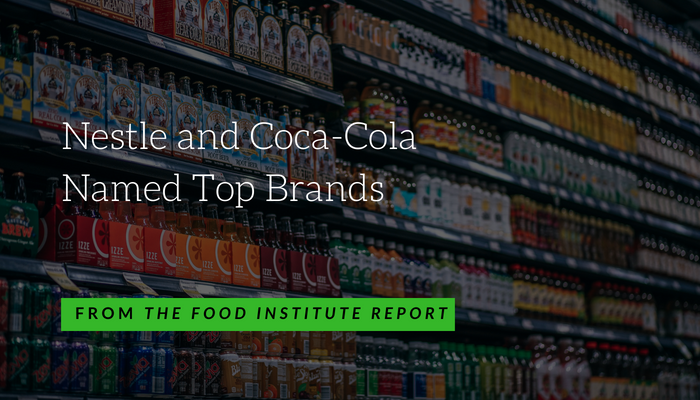 Coca-Cola once more came in first among the world’s most valuable soft drink brands, at $30.4 billion. The firm is leveraging its brand with health-conscious products such as Coca-Cola Zero Sugar. Second place Pepsi was valued at $20 billion. Red Bull, at $7.6 billion was third, followed by Nescafe at $5.3 billion and Gatorade at $4.9 billion. Notably, Monster Energy ranked seventh at $3.7 billion, climbing 31%, while Dr Pepper was ninth at $3.3 billion, growing 30%.

The top six soft drink brands retained the same ranks as last year. However, the fastest-growing was Italian coffee brand Lavazza. The firm moved up 34% to $1.2 billion and to 17th this year from 24th in 2017. Italy-based Lavazza experienced organic brand growth in all its markets, and acquisitions have boosted the group’s income. Lavazza’s consolidated revenues reached $2.3 billion in 2017, up 6.3% from the previous year. Meanwhile, Nespresso saw a 23% brand value change in 2018, while Twinings saw a 17% increase.

Yili made a significant impact in the dairy category. Due to the lack of change among food and drink industry leaders, emerging market brands are standing out among competitors. Yili’s brand value topped leaders such as Kellogg’s, Kraft and Heinz.

Dairy is one of the strongest performing sectors in the food industry, averaging 13% brand value growth year-on-year. Within the sector, the Chinese market is the most dynamic in the world, expected to overtake the U.S. as the largest market for dairy products by 2022, due to rising affluence and improved product accessibility in China. In turn, leading brands such Yili are focusing on the changing demand and product innovation.

Yili stands out as best-performing among the 10 most valuable food brands in the world, rising to 3rd place from 8th in 2017 following 43% growth to $6.2 billion brand value. This is the result of fast revenue growth and high profitability, with the brand having potential to expand into non-dairy categories or internationally.

Other dairy brands who had a significant value increase were Philadelphia Cream Cheese and Stouffer’s, both up 33%.

Although Yili is ahead of Danone in terms of brand potential, the French company still has a more valuable brand, growing above the average for the industry at 15% year-on-year, at $9.1 billion. Its performance was mainly driven by improved sales.

The performance of Mengniu, another Chinese dairy brand growing at a similar pace as Yili, was noteworthy, as well. The brand was up 45% year on year, but from a lower base, with its brand value at $3.4 billion.

Mirroring Lavazza’s success in the drinks brand ranking, Italy’s Ferrero had the best-performing food and drink brand portfolio, up 29% to $8.7 billion in 2018. All of Ferrero’s major brands recorded significant year on year growth, with three ranking in the top 50 food brands. Ranked 16th, Kinder is Ferrero’s most valuable and fastest-growing brand (up 41% to $3.1 billion), while Nutella is a new entrant to the list, at 38th.