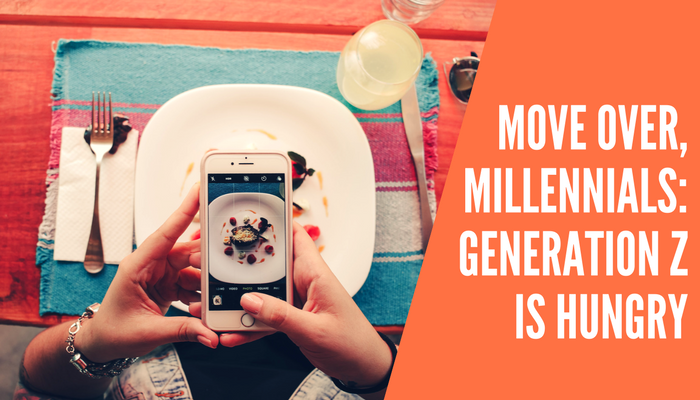 Known variously as Generation Z, Gen Z, the iGeneration and the Post-Millennials, the demographic cohort born in the mid-1990s to the mid-2000s is beginning to emerge as a powerful consumer group. And what this group wants to spend its money on is food.

Generation Z's spending is up 6% from fall 2017 and up 2% from a year ago, according to Piper Jaffray's Taking Stock With Teens survey. The demographic commands approximately $380 billion worth of retail sales annually in the U.S. Piper Jaffray noted it surveyed 6,000 teens across 40 U.S. states to track discretionary spending trends and brand preferences.

"Our spring survey has shown an uptick in teen spending, which we believe mirrors the economic expansion we are experiencing broadly. Within a teen's wallet, food is the top priority but video games (for males) and beauty (for females) are gaining share," said Erinn Murphy, Piper Jaffray senior research analyst.

Food spending reaccelerated as teens' top spending category, returning to its 24% peak. Chick-fil-A, Starbucks and McDonald's are the top restaurants for both upper- and average-income teens, while Chipotle and Panera round out the top five among upper-income, and Taco Bell and Buffalo Wild Wings among average-income.

Additionally, the study found Gen Z members are spending more money on dinner, with 66% of meals happening at night. Lunch represented 20% of meals, with breakfast accounting for a paltry 2% of meal occasions.

However, members of Gen Z aren't just going out for food at fast-food or quick-service restaurants to munch on dollar menu burgers and slurp down soda. Members of the cohort have higher consumption rates of organic foods and beverages than any other group, according to The NPD Group. Gen Zs differ from Millennials in their attitudes towards large, multi-national brands, in that they seek brands that support their lifestyle, and are willing to use them regardless of the brand's size.

"Food marketers should understand that this generation grew up knowing that food is much more than sustenance; food represents culture and therefore is an expression of who they are," NPD food industry advisor David Portalatin said. "This generation was raised to be real and true to themselves and they expect the same from their foods and beverages."

Fast casual restaurants are primed to take advantage of the changing of the guard, as these restaurants often embody the very traits Generation Z is looking for. Convenient, affordable and customizable dining experiences are favored by the cohort, which many fast casual restaurants try to offer. However, to fully engage these customers, restaurant brands will need to position themselves well on social media and promote similar values, reported QSR.

UK-based research group Unidays confirms Piper Jaffray's findings. The group noted Gen Z is spending more on food than preceding generations and being more frugal elsewhere. Almost half of the students surveyed for the group's Gen Z: What Restaurants Need to Know report spend between $10 and $20 on a restaurant order, and 15% drop upwards of $20.

"There's a really big opportunity now because of their life stage. They're a population that's extremely connected on social and digital channels," Uniday's vice president of partner innovation Marisa Allan said. "They're moving to new cities, making new friends and experiencing new cultures and foods. They're forming habits now and making adult decisions for the first time. They're making memories that will stay for a lifetime."