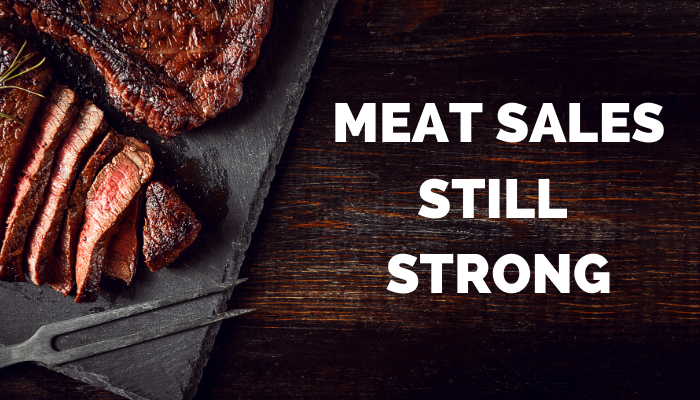 Demand for meat is accelerating with $50.5 billion in sales for 2019, according to The Power of Meat 2020 from FMI, the Foundation for Meat and Poultry Research and Education, and the North American Meat Institute.

Meat department sales are strong in dollars and volume, driven by beef and chicken, while spending per household increased. When it comes to meat consumption, moderation is much more popular than elimination. Twelve percent of those surveyed were flexitarians looking to reduce their animal protein through smaller portion sizes and/or a day without meat or poultry.

"One of the most compelling storylines in the analysis is that 83% of shoppers purchase specific cuts of meat and they are eating smaller portions, but with total volume sales up slightly, that means they are eating less more often," said FMI VP, fresh foods, Rick Stein.

Meat brands benefited from being a preferred purchase among younger shoppers, but 2019 was a strong year for private brands, which were up 12.3%. Fifty-eight percent of shoppers want to hear from brands about nutrition, while 57% are interested in hearing about food safety practices, 46% about animal care practices, and 40% about brands' environmental impact.

As meat consumption isn't slowing down, cold storage facilities are seeing a glut of pork, chicken, and beef intended for export to markets hit by the coronavirus outbreak, reported The Wall Street Journal (March 2). Chicken in U.S. cold storage facilities increased 12% over the first month of the year to 957.5 million-lbs., the highest level on record for the month of January, according to USDA, while the amount of pork in storage climbed 11% versus Jan. 2019.

For those who are concerned about meat consumption, Katapult launched an initiative in London to invest in food technology such as lab-produced meat, reported Reuters (Feb. 29). The program aims to identify startups creating tech to combat climate change, biodiversity loss, and malnutrition, and will make a $150,000 investment, as well as help with marketing skills and networking opportunities.

"We wanted to see if there is a way to fix the (global) food system...food tech is probably the most effective lever we can explore," said Katapult Food's Eirik Svendsen.

In order to compete against traditional beef, Impossible Foods cut prices for its products about 15% to distributors in the U.S. and asked them to pass their savings on to restaurants, reported Reuters (March 3).

The move comes amid increasing demand for its flagship Impossible Burger served at thousands of restaurants, including Burger King, Red Robin, Cheesecake Factory, and Hard Rock Cafe among others. The company said the price cuts would not affect its products available at about 150 retail stores.