Jun 3, 2019
Are McDonald's and KFC Next to Add Plant-Based Options?
By Victoria Campisi 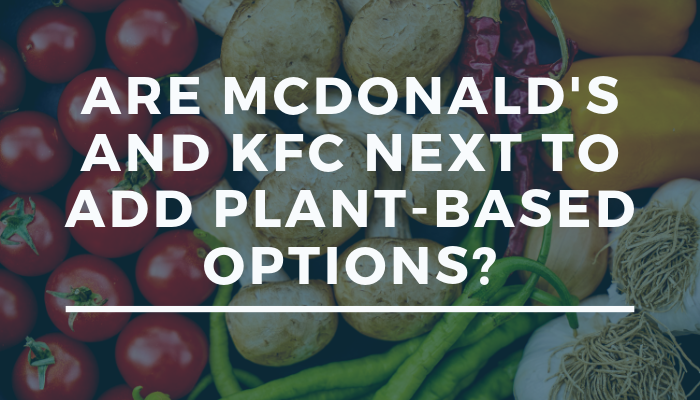 Vegans may soon be able to add two more fast-food chains to their rotation.

McDonalds may be getting on board with plant-based substitutes. As pressure builds for it to add a vegan burger to its menu, CEO Steve Easterbrook says consumers should "watch this space," reported CNBC (May 29).

Easterbrook compared the decision to when it started offering all day breakfast asking, "The question is: Will the demand make absorbing it worth the complexity because it will drive the business? We had a similar discussion maybe four years ago about All-Day Breakfast." After being implemented, All-Day Breakfast spurred same-store sales growth for several quarters and it didn't take long for competitors to up their own breakfast offerings.

"When you look at the whole meat-substitute type ideas, I think what will be interesting for us will be to see who is particularly interested in that," said Easterbrook. "Is it an existing customer who just wants an alternative option; does it bring a new customer in?"

The chain already sells a plant-based burger in Germany, but says individual markets decide what's best for their own customers. Similarly KFC already tests a vegetarian "fried chicken" in the UK, but has been meeting with major plant-based meat makers to discuss a vegan version of its fried chicken in America, reported Business Insider (May 30). The chain's U.S. president Kevin Hochman used to think this was not an option until recently.

"If you would have asked me six months ago, I would have said no ... because, we're about fried chicken," he said. He noted that if the buzz around these products translates into long-term consumer demand, the chain will test a plant-based meat substitute in the U.S.

McDonald's competitors already began adding vegan options, including Burger King who decided to roll out the Impossible Whopper — made from the plant-based Impossible Burger — nationally, following a successful test run in St. Louis. In the pilot, the offering boosted traffic to locations in the test market by 18.5% in April, according to a report from inMarket inSights.

Though McDonald's traffic grew last quarter, it struggles to bring customers back to its stores, like many in the industry. However, if the company decides to go the plant-based route, a partnership with Beyond Meat could be beneficial for both parties. Beyond's stock could surge more than 30%, according to Jefferies analysts, reported Markets Insider (May 28). "Beyond Meat is well positioned to partner with McDonald's," they said, adding a deal "makes sense for both parties."

The analysts argue a partnership looks likely for several reasons, tops being Donald Thompson, McDonald's former CEO and COO, is on Beyond Meat's board. Additionally, Impossible Foods is struggling to meet demand, meaning it might be unable to meet McDonald's supply needs and Burger King's nationwide rollout of Impossible Whoppers means there's a "high probability" that McDonald's will launch a rival offering, they added.

Analysts at JPMorgan agreed, writing, "At least one major quick-service restaurant chain likely will become a customer by the end of the year," in their Beyond Meat initation note. A partnership with McDonald's would add over 13,000 locations to the company's U.S. footprint.