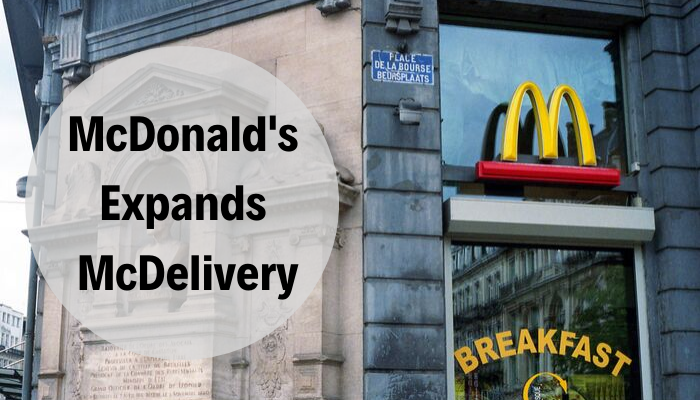 McDonald's expects McDelivery will be available at 70% of its U.S. system by the end of 2019 and wants consumers to celebrate with them.

McDonald's expects delivery to be a $4 billion business globally in 2019, leveraging several different models, including partnering with various third parties for ordering and delivery fulfillment. The company is seeing about twice the average check on a typical delivery order, according to CEO Stephen Easterbrook.

Additionally, 60% of delivery orders are placed at night, and one million customers around the world are having McDonald's delivered to their homes daily, according to the company. "Globally there are more than 10 McDelivery orders placed every second," said Easterbrook.

In July, McDonald's added DoorDash as a delivery partner, ending exclusivity with UberEats, reported CNBC (July 16). UberEats was the sole delivery provider for McDonalds since 2017, when McDelivery was launched in the U.S., bringing delivery to about 64% of stores.

Prior to Uber's IPO in the spring, Bloomberg reported that McDonald's was pushing for lower delivery commission fees and an end to the exclusive partnership. When a customer places an order on UberEats' platform, restaurants have to pay between a fee that reportedly ranges between 15% to 30%, taking a chunk of the restaurants' profits. In its filing to go public, Uber said that it charges a lower service fee to some of its largest chain restaurant partners to gain access those restaurants' customers.

At the end of August, McDonalds revealed it was expanding the partnership with DoorDash across the U.S., expanding McDelivery from 9,000 restaurants to more than 10,000 locations via the two partners, reported CBS News (Aug. 28).

Third-party delivery services can help restaurants reach new customers, generating more revenue. However, they have come under fire from food retailers by charging extra transaction fees. McDonald's, reportedly wary of those fees, negotiated lower commissions with Uber Eats when it signed on with the service, reported The Wall Street Journal(July 16).