May 30, 2018
Making the Case for Blockchain with Romaine
By Chris Campbell 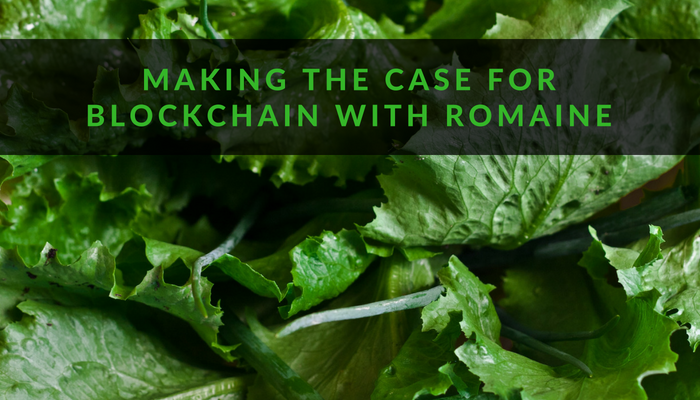 In late March, eight customers that visited fast food restaurants in New Jersey were rushed to hospitals with classic symptoms of E. coli. These eight people represented the first of nearly 200 that would eventually be sickened by the disease, and it would be weeks before a culprit was found. That culprit, as it turns out, was romaine lettuce sourced from Yuma, AZ. Now, food safety advocates are looking to the technology that powers cryptocurrency to fight foodborne illness: blockchain.

Every year, about 900 foodborne illness outbreaks occur. The current system requires investigators to work one link at a time from victims to fields, tracing multiple paths across companies and growers, and sometimes even national borders, in order to find the source of an outbreak. The illnesses can cause up to $152 billion per year, according to the Pew Charitable Trusts, and the time required to find a source often opens up the possibility of additional infections, reported Los Angeles Times (May 27).

The current model requires good faith reporting from every step in the process, but this process is disjointed. Take this example: a grower sells its romaine lettuce to a distributor, who then turns around and sells it to a retailer. The grower correctly logs the name of the distributor, but that distributor mistakenly attributes another company as the source of the product. When the retailer gets reports that customers are getting sick after eating romaine lettuce purchased at one of its stores, traceback efforts will require additional time as investigators determine that the original source of the romaine was not the business indicated by the distributor.

However, blockchain technology requires consensus among all parties. A complete record of each transaction would be held and verified by the entire supply chain, giving traceback investigators more accurate information to ensure others do not get sick. More importantly, it would likely save time, which could lead to saved lives.

"I often describe that as food traceability at the speed of thought — as quickly as you can think it, we can know it," said Frank Yiannas, vice president of food safety for Walmart, which is scaling up an IBM-driven pilot blockchain that already includes top suppliers such as Unilever, Nestle and Danone. Yiannas once asked his staff to trace a packet of sliced mango in 2016, and it took them six days, 17 hours and 26 minutes to find it.

Under the current system, this would be considered fast. However, with blockchain, that same mango product can be found in 2.2 seconds.

As of CDC's latest update issued May 16, 172 cases of E. coli 0157:H7 were linked to romaine lettuce. The outbreak spread to 32 states, resulting in 75 hospitalizations and one death. The agency noted the Yuma growing region finished its harvest April 16, and the 21-day shelf life of the product made it very unlikely that product remained on store shelves. However, the time necessary to complete traceback efforts likely allowed for more illnesses to occur.

On top of that, the entire industry remains unsure of where the product was actually sourced from. Here at the Food Institute, the best guess we have so far is based entirely on a potential class action lawsuit. The case alleged certain romaine lettuce products were falsely labeled as "ready to enjoy" when they were actually contaminated with E. coli and led to two hospitalizations. The suit names Taylor Farms Pacific Inc., Taylor Farms Retail Inc., Taylor Farms California Inc., Sam's West Inc., and Walmart Inc. as defendants, reported Legal Newsline (May 23). However, without a verdict in the case, it is difficult to assign blame to Taylor Farms. In addition, eight lawsuits that were filed in connection with the contaminated romaine lettuce complicate matters. Suits have been filed against three Papa Murphy's restaurants in California and Idaho, a Texas Roadhouse in Georgia, a Panera in New Jersey, a Freshway in Pennsylvania, and two Red Lobster restaurants in Arizona, reported Idaho Statesman (May 24).

To be fair, a Leafy Greens Food Safety Task Force was formed to address issues associated with recent foodborne illness outbreaks attributed to consumption of leafy greens. Task force membership will include representatives of growers, shippers and processors from Arizona, California and other production regions, the produce industry and related trade associations, state and local government agencies, scientists and researchers, consumer advocacy, and the buyer community. How effective the program will be remains to be seen, but it's a start.