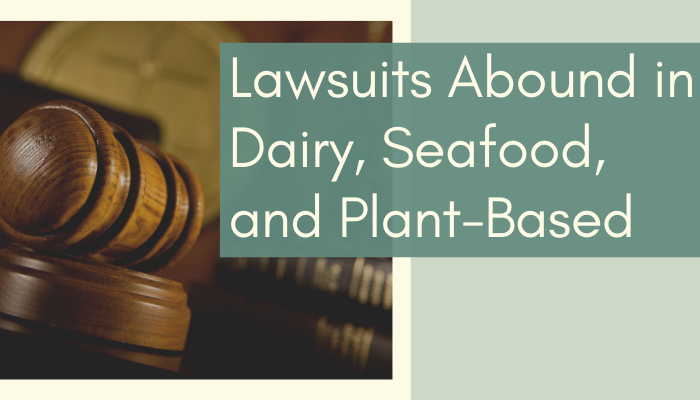 From dairy to seafood to plant-based, lawsuits were top of mind across various food categories on Monday morning at the Food Institute offices.

The court found the plaintiffs in the case failed to show how Lion Capital participated in the alleged conspiracy. As such, the court argued the claims against Big Catch operating as the alter ego of Lion Capital must also be dropped.

The case stemmed from a series of cases first filed in 2017 regarding price fixing. The allegations were filed against the country's three largest tuna brands: Bumble Bee, Starkist, and Chicken of the Sea.

The criminal charges were filed in the form of an information. Releases made in this way are often a prelude to a guilty plea, with SEC saying Riehl apologized in a letter to investors. Prosecutors alleged the Riehl Investment Program lured investors to a fund that primarily made loans to Trickling Springs, which declared bankruptcy in Dec. 2019.

Riehl faces up to 45 years in prison and a $5.5 million fine in addition to an order to pay restitution. Separately, Riehl and alleged co-conspirators were ordered to pay just under $4.4 million in a cival penalty by the state banking commission for some 370 violations of state securities law.

In the plant-based sector, Burger King defended itself from a lawsuit alleging the Impossible Whopper is not vegan. The company maintained it never billed the product as vegan, and argued the plaintiff in the proposed class action did not request information about the product at the time of purchase, reported Reuters (Jan. 31).

Burger King further said "the smallest amount of investigation" on its website or via media reports would show the item was not vegan. The plaintiff argued in a Nov. 18, 2019 lawsuit the company "duped" vegan consumers who were purchasing the Impossible Whopper at a premium price.

Additionally, Impossible Foods, which helped designed the product, claimed its products are for meat-eaters who want to consumer less animal protein, and not strictly for vegetarians or vegans.

The plaintiff "assumed that an Impossible Whopper would satisfy his own particularly strict form of veganism ... solely because he asked a Burger King restaurant employee to 'hold the mayo,'" Burger King said. "This claim has no basis."

The suit claimed Beyond Meat failed to disclose the termination of a supplier agreement, which constituted a breach of the agreement. The action therefore exposed the company to legal liability. Additionally, the suit alleged the company falsified a food safety consultant's report, which was then represented as accurate to a supplier.