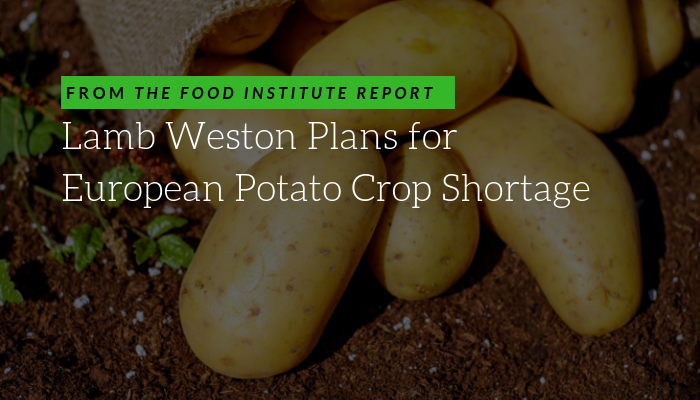 Lamb Weston Holdings (LW) is planning ahead to combat the challenges its potato crop face in Europe due to severe heat and drought conditions.

LW’s Q1 2019 results show sales increased 12% with a strong growth in each of its core segments. The results reflect a favorable operating environment in North America, including solid demand growth for frozen potato products and tight manufacturing capacity.

“We anticipate that these operating conditions will remain generally favorable through fiscal 2019. Our expectations for the cost environment remain the same with steady inflation in each of our major cost categories including potatoes,” said President and CEO, Tom Werner.

In contrast to North America, the operating environment in Europe will be more volatile through fiscal 2019 as a result of poor potato crop in the region. The European potato crop is irrigated; it is dependent on rainfall, unlike the crop in the Columbia basin. In July and August, extreme drought conditions in Europe negatively impacted the crop yield and quality, resulting in potato price futures more than doubling versus earlier in the year.

“As a result, we expect raw prices for Lamb/Weston/Meijer and for the industry to sharply increase in the second half of our fiscal 2019,” said Werner.

The potato performance in production facilities will need to be observed to see how the potatoes are going to take to storage before a final assessment on the crop’s overall quality is made, as well as the financial impact versus expectation.

“The crop is still coming out of the ground in Europe, so we have to fully assess that,” said Werner. The company is taking actions that are going to remediate some of the difficulties with the crop and the timing of pricing versus the cost.

“I am confident that our…team in Europe will work through the challenges with the plans that they’ve developed, including raising prices which we’ll be phasing in over the next couple of quarters, working closely with customers to adjust production schedules and product specification requirements, and driving productivity and other cost-saving initiatives across the organization,” said Werner.

LW will stretch its U.S. production capacity to support customers as needed. It will leverage its U.S assets to serve other potential customers, especially in Asia and the Middle East.

Despite some near-term volatility in Europe, LW remains well positioned to deliver its fiscal 2019 targets.

“The team in Europe is doing a terrific job making sure that as we look at the crop and understand how the quality and the yield is going to play out, we’ve taken actions to make sure that we have potatoes available to service our customers,” said Werner.

The company has seen the potential disruptions of concern and have been deliberately planning and working through the process. They have successfully been able to deal with similar situations in the past without disrupting the business.

LW’s fiscal 2017 results were pressured by a poor European crop which the company mitigated using pricing and cost reduction actions, continuing to benefit its performance through fiscal 2018.

“These results reflect how well our commercial and supply chain teams continue to execute on our strategic and operational objectives,” said Werner.

In its global segment, there was strong volume growth by capitalizing on limited time offering opportunities in the U.S and internationally. Growth was driven by support of its chain restaurant customers in North America and increasing exports.

In its foodservice segment, there has been positive customer feedback to shifting to a direct sales model.

300 million-lb. French fry line in Hermiston, OR. The line remains on track to be operational in May 2019.

The company remains committed to its retail business. “It plays an important part within our network in terms of balancing out the overall potato crop based on some of the retail products we make,” said Werner.

The Grown in Idaho launch allowed the company to gain share and, based on the category containing all of its private label license brands, it is  the share leader in the category and it is growing.