Jan 16, 2018
Instacart Has Its Own Plan to Dominate Grocery E-commerce
By Jennette Rowan 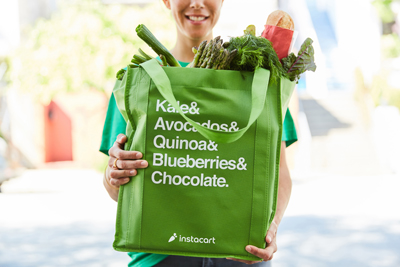 Following Target's news that it would acquire delivery startup Shipt for $550 million back in December, the industry was abuzz with speculation of how this would affect rivals. Analysts were particularly interested in seeing how the merger would impact fellow food delivery company Instacart, which, at the time, was a partner of Target.

After expressing our own thoughts on how Instacart would have a new competitor in Shipt, we found out that Target would no longer be partnering with Instacart for deliveries. Target didn't provide a timetable for winding down its business with Instacart, but it was noted that Instacart was working with Target in just three markets: Minneapolis/St. Paul, MN, Chicago, IL, and San Francisco, CA, reported Minneapolis/St. Paul Business Journal(Jan. 8). Sources also claim Target accounted for less than 1% of Instacart's business.

Losing Target as a partner seems like just a blip on the radar for Instacart, which looks to have a lot more up its sleeve. Since December, it has added delivery partnerships with Sprouts Farmers Market in Tucson and Phoenix, AZ; Price Chopper in Utica, Fulton, Oswego and Poughkeepsie, NY; QFC in the Puget Sound-area of Washington and the Portland, OR, area; Food Lion in North Carolina; and expanded its partnership with Supervalu.

It also followed all of that expansion up by announcing it would acquire Unata, a Canada-based company that provides 1-to-1 digital solutions for grocers. Unata will become an independent subsidiary of Instacart, maintaining its name and brand, and will keep its headquarters in Toronto.

Apoorva Mehta, Founder and CEO of Instacart says, "This acquisition...represents a landmark win for retailers, who will benefit from Instacart's scale, Unata's highly configurable technology, and the deep grocery industry integrations this acquisition will enable." Instacart notes it expanded from 30 to over 190 markets in 2017 alone.

While we still can't be certain who will come out on top of the grocery e-commerce market in the next few years, it is clear that Instacart has emerged as a major player against bigger competitors like Amazon, Target and Walmart.