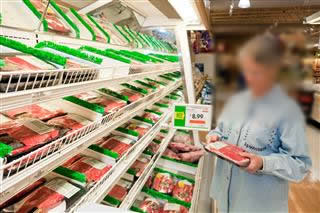 Shoppers looking through the meat case for the holiday season and the new year will likely see lower retail prices on beef, even for popular holiday cuts like the tenderloin and rib roast. What's driving this trend? With beef production on the rise, retailers are finding it easier to lower prices to better serve their customers.

November 2016 was the largest month for beef production in the U.S. since 2010, according to USDA. USDA updated its beef production forecast for 2016 in its World Agricultural Supply and Demand Estimates Dec. 9. October numbers were also strong, with beef production hitting 2.2 billion-lbs. that month.

Using this information, CattleFax reported beef prices trending down more than 10% from their highs in late 2014. With beef production continuing to rise at a projected 6% in 2016 and another 4% in 2017, CattleFax expects prices to continue to drop. According to CattleFax market analyst Lance Zimmerman:

"As beef production has increased and demand remains exceptionally strong, better prices will be passed on to consumers...This holiday season, it means consumers can expect to see lower pricing reflected in retail advertising, better promotions on beef and more limited-time offers on menu items."

However, beef won't be the only item to see growth in 2016. The meat substitutes market is expected to reach nearly $6 billion by 2022, according to MarketsandMarkets. Health awareness, meat adulteration and environmental issues are among the factors driving the market. While soy-based options are the most widely used meat substitute worldwide, the frozen meat substitutes segment is projected to grow at the highest rate during the forecast period.

Grocery shopping has evolved from a Main Street event (where we go to our local market frequently to purchase food and goods) to an order most anything, from anywhere, at any time online. Online shopping, which started off slowly, was initially an underwhelming choice for...