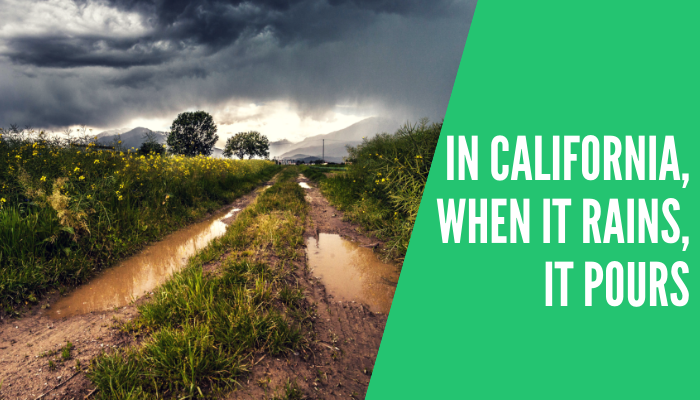 Most years, when we talk about California in The Food Institute Blog, it's about a drought. This year, it's the complete opposite.

A wet winter is replenishing groundwater aquifers in California, according to the California Department of Water Resources. Previous droughts spurred the creation of places for pond water to filter down to underground aquifers in a process known as active recharge, reported AgAlert (March 6).

Additionally, snow totals in California's Sierra Nevada Mountains will be favorable for farmers in the San Joaquin and Sacramento valleys, according to Weathermelon. Mountain ranges in Colorado and Utah, which supply farmers in southern California and Arizona, are posting above-average totals, as well, reported The Produce News (Feb. 26).

However, although rain is a good thing, in California, it's turning out to be too much of a good thing. Take a look at these recent stories regarding harvest delays caused by the rain:

Luckily, it appears these conditions are abating and that normal harvests will begin. Although it varies by region and commodity, it would appear late-March to mid-April will be the sweet spot for production to level off near historical norms. For a region that had to contend with wildfires the past two years, I'm sure many were ready for the rains.

I just don't think they believed they would get this much.