Oct 15, 2019
How Technology is Shaping the Meat Alternative Space
By Victoria Campisi 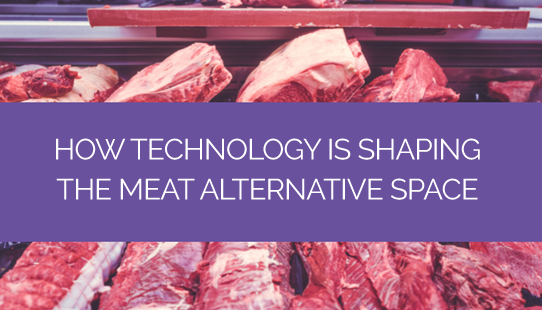 Animal agriculture is responsible for about 18% of human-caused greenhouse gas emissions globally, according to PreScouter's Meat Alternatives-2019 research. Reducing or stopping the consumption of red meat could help fight environmental issues from these emissions.

Various methods are under development for producing real meat to feed a growing human population in a way that is healthy, sustainable and animal-friendly. While lab-based meat may be several years away from becoming commercially available, technology has already allowed for meat alternatives to appear on grocery store shelves and restaurant menus.

One key technology is extrusion. Extrusion is a thermomechanical process by which moistened, proteinaceous plant materials are plasticized and pushed through a die by a combination of pressure heat and mechanical shear.

High moisture extrusion cooking enables the production of meat analogues that are texturally like muscle meat from plant or animal proteins. The appearance and mouthfeel are similar to cooked meat while their high protein content offers a similar nutritional value.

Additionally, 3D printing could greatly benefit the meat alternative industry and enable a new affordable meat category, with some claiming 3D printed plant-based meat has the potential of being customizable.

"I was able to generate something that had the same texture as meat, I was able to create micro fibers that resembled not just a hamburger or a meatball but had the same texture as muscular tissue," said Giuseppe Scionti, founder of Novameat, a food tech startup. In 2018, the company created a meat substitute through 3D printing technology, whereby a plant-based paste was used with syringes placed in a 3D printer featuring AutoCAD software.

Another company working with 3D printed plant proteins is Redefine Meat. Founded in 2018, Redefine Meat's 3D printer can mimic the muscle fibers found in traditional meat as well as the way that fat and water are trapped in the meat matrix.

Meanwhile, cellular agriculture is an emerging technology focusing on the production of agricultural products from cell cultures.

By using a combination of biotechnology, tissue engineering, molecular biology and synthetic biology, cellular agriculture aims to create new methods of producing proteins, fats and tissues that would otherwise come from traditional agriculture—without needing to slaughter animals. U.S. FDA and USDA recently agreed to regulate the production of cell-cultured meat alternatives derived from livestock and poultry.

Mosa Meat is a cultured meat company that was founded in 2016 following the unveiling of the first slaughter-free hamburger in London in 2013. The company is using cellular agriculture in harvesting cow muscle cells to produce muscle fibers, which are then processed into meat products. According to PreScouter, one such harvest could provide sufficient seed material to grow enough meat to produce 80,000 hamburger patties.

Campbell witnessed its best quarterly performance in more than 30 years, according to Consensus Metrix, as the the company worked on making its soups better tasting, more filling, and derived from simpler ingredients. It also added trending varieties, such as bone broth, reported  read more