Oct 24, 2018
The Hershey Co. Bets on Twitch, and Maybe You Should, Too
By Chris Campbell 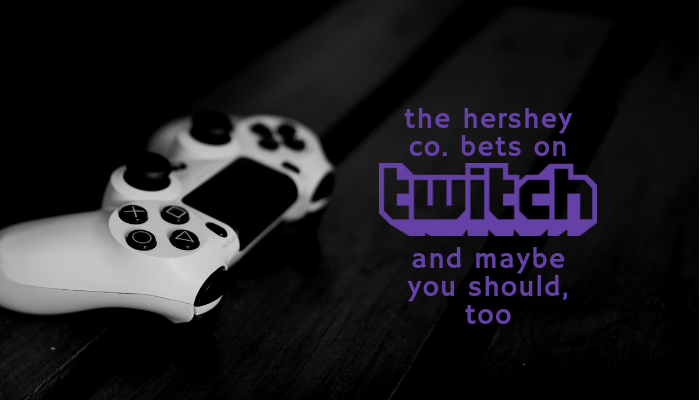 During the last weekend of October, video game enthusiasts the world over will gather in San Jose, CA, for TwitchCon 2018. This year, however, there is a notable food tie-in.

That tie in will be a somewhat surprising partnership between the Hershey Co. and two of gaming's biggest names. Ninja and DrLupo are teaming up with Hershey to help promote the launch of its new Milk Chocolate Bar with Reese's Pieces candy. The gamers will be livestreaming together to promote the candy bar.

However, this appears to be one of, if not the, first product tie-in with Twitch.

For the uninitiated, Twitch is a livestreaming video platform owned by Amazon subsidiary Twitch Interactive. The service primarily serves video game live streamers, and has included broadcast of eSports competitions. Additionally, Twitch has broadcast concerts, creative content and other “in real life” streams to its viewership.

Twitch’s primary audience is constituted of males (81.5%), 55% which are between the ages of 18 and 34. The service generates 15 million daily active users who watch more than 2.2 million creators who share their gaming live on Twitch every month.

And when it comes to Twitch viewership, no one is bigger than Ninja. Richard Tyler Blevins, more commonly known by his online alias Ninja, boasts more than 11 million followers and averages 43,000 viewers per stream. That’s not to diminish DrLupo, who has just about 2.6 million followers on his own.

Even assuming that all of DrLupo’s fans also follow Ninja, the Hershey Co. just found a way to reach 11 million consumers who constitute a, shall we say, “fervent” fan base. The Hershey Co. is betting that by debuting new product lines alongside two of the industry’s most recognizable gamers, it will be able to convert new brand advocates and reinvigorate those who are already familiar with its products.

The advertising world is changing. eMarketer predicts that digital media ad spending will account for 50% of total advertising dollars by 2020, and the firms expects the number of those ditching their subscriptions to cable and satellite TV will climb 32.8% to reach 33 million people by the end of 2018. Forget worrying about consumers getting up to use the bathroom while commercials run; more and more are simply abandoning traditional TV to find services that offer them commercial-free experiences.

In that light, the Hershey Co.’s play here makes the most sense. As Ninja says, “It’s exciting to see a brand like Hershey’s is getting into the gaming world. Snacking is an essential part of gaming, so partnering with Hershey’s at TwitchCon for the release of their new bar was a no-brainer.”