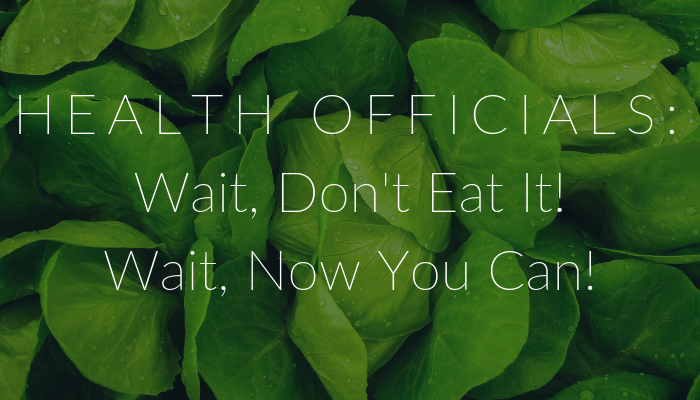 The Wednesday before Thanksgiving is typically a slow news day, but this year at the Food Institute, we began to track a new outbreak of E. coli linked to romaine.

CDC initially advised retailers and restaurants to not sell or serve romaine lettuce as the product was linked to an outbreak of Shiga toxin-producing E. coli. CDC reported 32 illnesses in the outbreak across 11 states, and the Public Health Agency of Canada reported 18 illnesses with the same strain of the bacteria in Ontario and Quebec.

The fact that CDC, FDA and other health agencies quickly removed the product from store shelves should be applauded. Earlier this year, at the United Fresh Washington Conference, I listened to the organization's VP of Food Safety & Technology Dr. Jennifer McEntire argue the time between the outbreak of an illness and the reporting of it was far too long. It seemed health officials were able to quickly address the situation.

However, this speed was contested by groups like United Fresh itself. These groups argued that certain producing regions, including Yuma, AZ, (which itself has a stigma associated with E. coli, but more on that in a minute) had not started shipping at the onset of illnesses and should not have been included in the outbreak warning.

No, this outbreak is not linked to the Yuma, AZ-region outbreak from 2017. However, it is linked to smaller and lesser-known outbreak from the beginning of 2017 that affected Canadians and Americans alike, as the E. coli strain appears to be the same one. It is impossible to determine how much uninfected romaine was thrown away, and I am sure that reports in the future will give us a dollar total on what was disposed of.

More importantly, how can anyone track how an event like this will affect romaine sales in the future? In the past 12 months, three E. coli outbreaks linked to romaine were reported by federal health agencies. At what point does consumer trust erode to the point that they don't purchase the product? It seems difficult to predict the magnitude of this shift, but I would say it's pretty clear this shift will take place, in some shape or form.

Anecdotally, on Saturday at my local supermarket, the only prepackaged salads available were spinach and butter leaf mixes. The clerk told me that they would likely stock fewer products with romaine even after the health advisory was lifted, as consumers would likely fear the product well after any serious threat had dissipated.

Although FDA and the Arizona Leafy Greens Association previously shown their willingness to adopt new standards to protect romaine, FDA took it a step forward with a new plan. The agency partnered with major trade associations to develop labeling to identify origin of harvest regions for romaine products, according to the FDA Commissioner Scott Gottlieb. The labeling will help improve FDA's ability to provide targeted information in the event of a future outbreak of illness.

"Knowing the growing origin of produce will continue to play an important role in allowing consumers to avoid contaminated products and facilitating market withdrawals and tracebacks. That’s why we previously called on the romaine lettuce industry to provide unambiguous and clear information to consumers regarding where their lettuce was grown and when it was harvested," said Dr. Gottlieb.

"In addition, the leafy greens industry has agreed to establish a task force to find solutions for long term labeling of romaine lettuce and other leafy greens for helping to identify products and to put in place standards for traceability of product," Dr. Gottlieb continued. "The task force will also examine information from this outbreak to identify measures that led to its occurrence and how to prevent ongoing safety problems with romaine lettuce. One outcome could be to extend the commitment for labeling for origin and date of harvest to other leafy greens."

We won't have an answer today or tomorrow regarding how consumers will react to the health outbreak, but it certainly made for a more interesting pre-Thanksgiving Wednesday than we are used to.