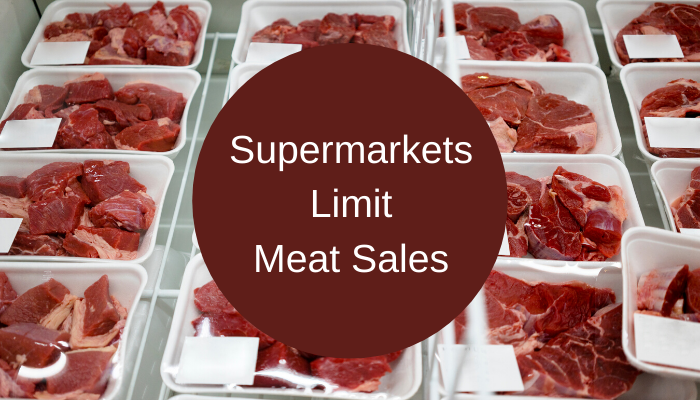 Some grocers are limiting meat sales due to shortages.

Kroger Co. is adding purchase limits on ground beef and fresh pork in some stores, reported CNN (May 1).

"We feel good about our ability to maintain a broad assortment of meat and seafood for our customers because we purchase protein from a diverse network of suppliers," said a Kroger representative. "There is plenty of protein in the supply chain. However, some processors are experiencing challenges."

Other large grocers, such as Wegman's, say they expect to be out of stock of different types of cuts very soon. "We may not have every product cut or variety available for the next few weeks," said a Wegman's spokesperson, but it does not anticipate any shortages.

Walmart does not expect it will need to set product limits on meat. It is working with its meat suppliers to convert production lines that normally process meat for the foodservice industry and redirect it for retail sales. Walmart is also focusing on supplying the most-commonly bought meat products and foregoing those that require more time to process in favor of larger cuts.

Additionally, Giant Eagle will limit the sale of ground beef and other on-sale meat items to no more than two per transaction. The chain said it was not having an impact on its supply, but rather that customers were purchasing more meat products than usual, reported Pittsburgh Business Times (May 4).

“We toured the plant and feel the additional measures implemented will allow employees to work safely while continuing to follow (CDC) guidelines and recommendations,” said Dori Ditty, the health officer for the county where the Tyson facility is located.

Cargill was slated to reopen its High River slaughterhouse in Canada on May 4, a facility where at least 935 employees tested positive for coronavirus, reported The Globe and Mail (May 4). After late-night talks on May 3, the union that represents workers at the site said it was not satisfied with the outcome of the discussion but advised employees who are healthy and cleared to return to work to report to their supervisors and to refuse to work if they don't feel safe. A poll the union conducted found 80% of workers oppose the reopening while 85% said they are afraid to return to work.

Although meatpackers have been changing operations to make employees less vulnerable to the virus, they still have a workforce depleted by illness or unwillingness to risk entering facilities. Plants that keep the production lines moving will have to do so more slowly.

Meanwhile, U.S. sales of plant-based meat products doubled in mid-April from the same period last year as the meat supply chain is strained under the outbreak and consumers turn to more alternative proteins, reported Bloomberg (May 1). Investments in the sector jumped up in the first quarter, with companies including chickpea protein maker InnovoPro, plant-based chicken nugget maker Rebellyous Foods, and Plantible Foods all completing funding rounds.

“The thesis of alternative proteins is strengthened by COVID-19,” said private equity veteran Jeremy Coller. “We see this as a massively growing and important sector.”

Impossible Foods Inc. has been in talks with investors about raising more funds, according to people familiar with the matter, reported Bloomberg (May 1). Impossible is considering investment offers because of the uncertain business environment caused by the pandemic, one of the people said. Additionally, rival plant-based company Beyond Meat's shares rose 21% this year, partly driven by the meatpacking closures.