May 1, 2018
Grocers Focused on Digital, Affordability in 2017
By Chris Campbell 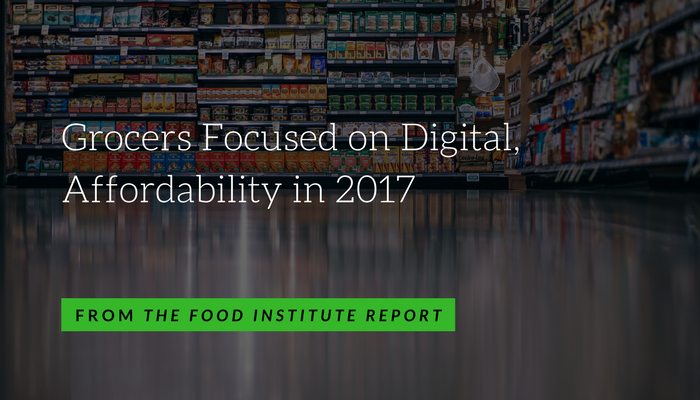 Although grocery expansions slowed down by 28.8% in 2017 as brands took a step back to examine their footprints and strategies, investment into grocery-anchored centers increased by 5.3%. Grocers like Aldi, Lidl and Grocery Outlet are showing shoppers that quality doesn't have to come with a high price tag, according to the report.

California had an increase of 1.6 million-sq. ft. of new store space (12.2% of the total across the U.S.) with companies like Grocery Outlet and Sprouts Farmers Market comprising 47.7% of openings across the state. These expansions will continue into 2018, as Sprouts keys in to the demand for fresh and healthy food and focuses on Mid-Atlantic growth. Grocery Outlet will focus on existing markets and provide bargain offerings and its community-oriented mission to underserved neighborhoods.

Virginia and North Carolina each saw strong growth that accounted for 19.7% of the total new grocery space in the U.S., with approximately 2.7 million-sq. ft. of new store space across both states. This tied in significantly with Lidl's entrance into the Mid-Atlantic market and its rapid expansion as it works up toward New Jersey.

Despite an ambitious rollout strategy of 50 stores in 2017, Lidl experienced initial problems in the U.S., as several construction projects were halted, and 2018 projected openings are a fraction of those in 2017. The company will most likely see long-term success in the U.S. due to European shoppers' brand loyalty, but it will require a slower and more-streamlined expansion strategy going forward, the report stated.

"The Aldi price point has generated significant interest from consumers and is expanding its market share by offering more healthy food options to attract an even broader audience," the report stated. Aldi plans to invest $3.4 billion in store expansions over the next four years while also focusing on remodeling 400 existing stores.

In 2016, private label products accounted for 17% of U.S. sales, but consumers can expect that percentage to grow rapidly, considering Aldi and Lidl's expansion plans, according to the report. Lidl's presence in a given market compels nearby grocery stores to lower prices up to 55%, according to a UNC study, and others have increased private label offerings in response to Aldi's entrance into the market.

Whole Foods' 365 private label is now available on Amazon and has pushed AmazonFresh sales by 35%.

Kroger, for its part, has shown its serious digital commitment with the launch of Kroger Edge, which communicates with smartphones' shopping lists to help guide customers to desired products, displays pricing and nutritional information, and is expected in 200 stores by the end of 2018.

Despite major deals in 2017 reflecting significant investment in digital and e-commerce platforms, only 5% of people are even interested in shopping for groceries online, and online penetration for the sector is at just 0.8%.

"The push for an omnichannel strategy speaks to shopper's needs for convenience and flexibility, especially for commodity items, and while digital integration will be tenet of success in our growing digital world, it is not a prediction of the fall of physical grocers," the study stated.

The following trends are gaining traction in 2018, according to the LaSalle report: