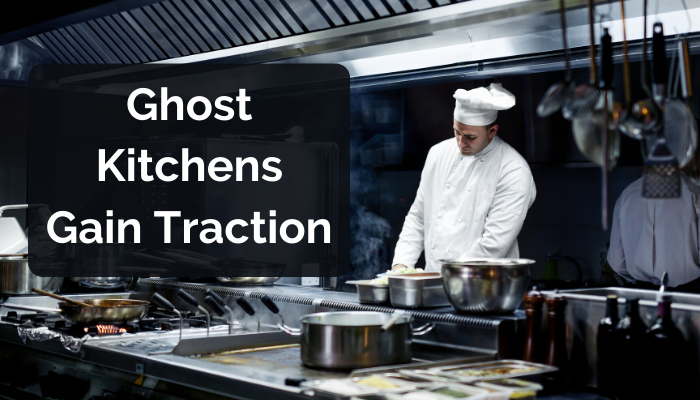 Restaurants are beginning to use these ghost kitchens to increase production capacity for meals for delivery and, in some cases, ship directly to consumers, according to an article by Louis Biscotti, the national leader of Marcum’s Food and Beverage Services group, in The Food Institute Report (March 30). Restaurants cut margins by not needing to make food for online orders at the restaurant, which has higher overhead than a kitchen focusing on delivery.

Ghost kitchens will have an increasingly significant impact on restaurant operations and boost delivery revenues for those that manage more of their own online orders by 2022, predicts Biscotti.

One ghost kitchen company, C3, recently seen demand for its virtual restaurant brands double during the coronavirus pandemic. The company is hiring 1,000 employees to to help it open 138 ghost kitchens by the end of 2020. Previously, the company was aiming to open only 85 locations this year when it announced its launch in February.

“We definitely have seen a fundamental shift in consumer behavior, and we’ve accelerated not just our locations, but a completely different business line, which is leasing restaurants that are dark in communities that need restaurants and food,” said Sam Nazarian, CEO of SBE Entertainment, which owns C3.

C3 is moving into three empty restaurants, with plans to open five virtual restaurant brands in each within the next four weeks. Some openings were moved up due to mandated dining room closures. An SBE-operated restaurant in midtown Manhattan slated to open in May has been converted into a ghost kitchen that hosts two of its virtual restaurant brands, including Sam's Crispy Chicken and sushi restaurant Krispy Rice. It is also producing menu items from Umami Burger.

Meanwhile, New York- and Dubai-based Kitopi raised $60 million for expansion in the food delivery space, reported Forbes (Feb. 12). Kitopi, founded in 2018, expanded to more than 1,200 employees worldwide, with a business model that helps both brick-and-mortar restaurants with delivery and delivery-only brands.

Kitopi uses “a smart kitchen operating system” to increase efficiency from call centers to delivery. The company operates 30 kitchens across the U.S., UAE, UK, Saudi Arabia, and Kuwait and this year plans to open 50 U.S. locations and 100 worldwide. It has partnered with more than 100 restaurants, including Operation Falafel, Pizza Express, Right Bite, and UNDER500.

Other ghost kitchens such as Kitchen United, CloudKitchens, Zuul Kitchens, Local Culinary, and Family Style are also finding their place in foodservice. The Local Culinary, for example, specializes in developing its own delivery-only brands, such as The Chef Burger, El Taco-Loco, Mama Roma, Dirty Fingers, Shu Shu, The Green Kitchen, This is Gyros, Chicks, and others.

Delivery-only brands could provide competition for restaurants, but existing restaurants could also take advantage of this infrastructure, using it to grow revenue.