May 16, 2018
Four Food Industry Bankruptcies to Keep an Eye On
By Chris Campbell 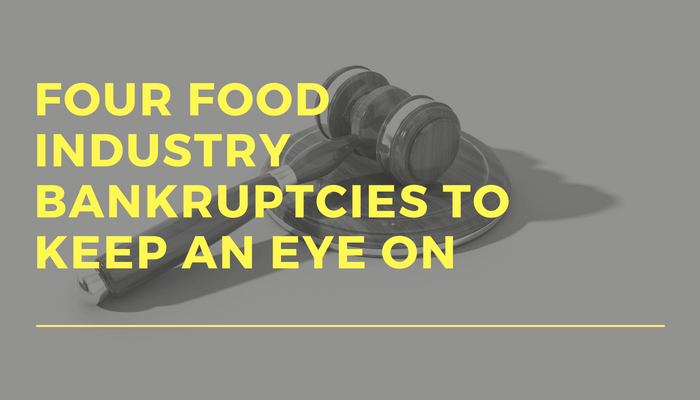 Business is never easy, and those undertaking the rigors of bankruptcy proceedings know this struggle all too well. Here at the Food Institute, we currently have our eyes trained on four food industry bankruptcies.

First, the U.S. Bankruptcy Court confirmed Southeastern Grocers' Chapter 11 reorganization plan. SEG, the parent company of Bi-Lo, Winn-Dixie, Harveys and Fresco, expects to complete its financial restructuring process, including a plan to reduce overall debt by $600 million, and emerge from Chapter 11 in the coming weeks. The company first entered into a Restructuring Support Agreement in March with a group of creditors and its private equity sponsor regarding the terms of a comprehensive financial restructuring that will position it for long-term financial health. At the time, it unveiled plans to close 94 underperforming stores.

Tops Markets is another grocery company in the midst of bankruptcy proceedings. The company can move forward with its plan to identify and shut down underperforming stores after approval from the U.S. Bankruptcy Court. The company has not yet outlined the scope of the store closings, reported The Buffalo News (May 14).

Additionally, Tops Markets defended its plan to pay bonuses to 115 key managers as it tries to restructure from bankruptcy. The bonus plan would give workers an incentive to stay at Tops and not seek new jobs elsewhere. Senior management and unionized store-level personnel would not be included, and any payments made to employees eligible for other Tops bonus plans established before the bankruptcy would be offset by their retention bonus payment, reported The Buffalo News (May 11).

Across the country, Portland, OR-based Sunshine Dairy filed for Chapter 11 bankruptcy and will close a facility in the city. The company will continue to operate a second location within Portland, and competitor Alpenrose Dairy will take control of the site, reported The Oregonian (May 11).

Finally, Atlanta-based RMH Franchise, one of the largest Applebee's franchisees, filed for Chapter 11 bankruptcy protection. The company, which operates 163 restaurants in 15 states, is expected to continue operating its restaurants during the bankruptcy reorganization, reported The State (May 8).