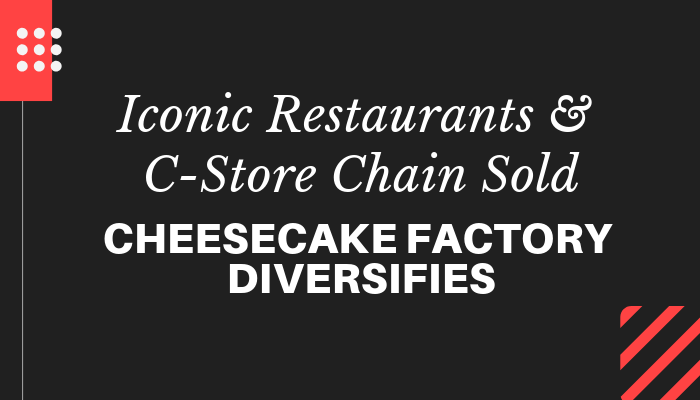 There have been more additions to the growing list of mergers and acquisitions in 2019.

"In turn, we have decided to bring together North Italia and Fox Restaurant Concepts, including Flower Child, with The Cheesecake Factory to reinforce our leadership position in experiential dining," said Cheesecake Factory CEO David Overton.

The transactions will be completed for $308 million in cash at closing. An additional $45 million will be due ratably over the next four years. The company previously invested $88 million in the North Italia and Flower Child concepts over the last three years in anticipation of their purchase.

Following the completion of the transactions, North Italia's operations will be located at the Cheesecake Factory's corporate headquarters in Calabasas Hills, CA, to help scale the concept nationally. Since the initial investment in 2016, the company has been working closely with North Italia's operations and leadership team to construct a comprehensive integration plan.

Meanwhile, Graham Holdings Company acquired Clyde's Restaurant Group for an undisclosed sum. Clyde's is comprised of thirteen restaurants and entertainment venues including eight Clyde's locations, 1789 restaurant, The Soundry and The Tombs, in addition to Old Ebbit Grill and The Hamilton —two of the top twenty highest growing independent restaurants in the U.S.

The EG Group had no presence in the U.S. until April 2018 with the acquisition of Kroger Co.'s c-store business. The purchase of Cumberland Farms will take the EG Group's network to a total of nearly 1,700 stores across the country, operating in 30 states, with merchandise sales of over $3 billion on an annualized basis.

"The acquisition of Cumberland Farms is a transformative one for our US business," said Mohsin Issa, founder and co-CEO of EG Group. "It brings us greater scale and a well-established network in locations we do not currently serve that is highly complementary to our existing US store footprint."