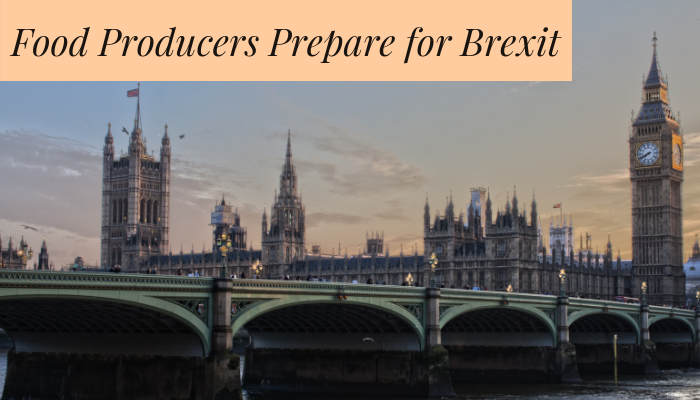 On June 23, 2016, 51.9% of voters in Britain chose to the leave the EU in what is now known as "Brexit." Supporters argue that the withdrawal from the EU would provide the UK with the freedom to make its political and economic decisions, while opponents say the move would severely weaken the country as EU member states would no longer be beholden to the UK.

Now, more than two and a half years later, the food industry is preparing for the fallout.

The BBC has an excellent resource regarding all things Brexit, which I would recommend. In short, Brexit was scheduled for March 29, and although UK Prime Minister Theresa May is promising Parliament a vote regarding a delay, food companies, agricultural producers and government officials in the UK and around the world are preparing for what could be a massive upheaval to the status quo.

At the center of the controversy is whether the UK will exit the EU with a deal in place, or if a so-called "No-Deal Brexit" will be performed. A Brexit featuring a deal with the EU would provide the nation with a sense of stability, for both businesses and individuals, regarding trade and residence. Additionally, it would allow the UK and the EU time to develop a permanent trading relationship.

However, as it stands at press time, no deal has been reached. In that event, the UK would sever ties with the EU immediately and without a transition period to guarantee citizens' right of residence. Food retailers have warned of fresh produce shortages in the event of a no-deal Brexit, while importers note lengthy delays could become the norm at UK ports.

The EU expects Britain to seek its assistance to avoid disruption to food imports in the event of a no-deal Brexit, according to the EU's agriculture chief. The commissioner claims Britain's reliance on imports for 40% of its food supply means price rises and fresh produce shortages are high risks for the government, reported Reuters (Feb. 23).

The assistance could be needed as a no-deal Brexit could lead to tariffs of 40% or more being imposed on food, driving up prices in shops across the UK and Ireland, according to retail organizations from both countries. The British Retail Consortium, Northern Ireland Retail Consortium and Retail Ireland warned increased tariffs, the devaluation of sterling and new regulatory checks would drive up the cost of fresh food and drink, which would be passed on to consumers, reported The Guardian (Feb. 21).

To help contend with such a scenario, the UK began considering temporarily removing tariffs on all imports in the event of a no-deal Brexit. The international trade secretary believes failing to slash duties would send retail prices soaring and hit UK producers who depend on supplies from the EU. However, the Labour Party claims the move would trigger "serious job losses in key industries," including farming, while the National Farmers' Union said the impact would be "absolutely savage," reported The Independent (Feb. 5).

The UK economy shrank by 0.4% in December 2018 amid deepening uncertainty about the country's future after Brexit, according to the Office for National Statistics. The services sector grew 0.3% over the quarter, but manufacturing shrank 0.9%. Consumer spending growth, which has been driving the economy, was 0.4% in the final quarter, reported The Independent (Feb. 19).

Meanwhile, British firms increased their investments in EU countries by $10.7 billion amid the uncertainty surrounding Brexit, according to a study from the London School of Economics' Centre for Economic Performance. Investment from the EU to the UK decreased since the vote, amounting to a loss of $4.5 billion, reported CNBC (Feb. 11).

UK households are reportedly already paying more for items due to Brexit, according to a report by the Centre for Competitive Advantage in the Global Economy (CAGE). The average worker had to spend more than $524 in the first year after the Brexit vote, or about $10 more per week, to afford the same purchases, reported The Independent (Feb. 7).

Nearly one in three British businesses are planning to relocate some of their operations abroad or have already shifted them to cope with a hard Brexit, according to The Institute of Directors. More than one in 10 already set up operations outside the UK as the prospect of a no-deal Brexit becomes more likely. Most firms considering a move were looking to open offices inside the EU, reported The Guardian (Feb. 1).

Kellogg is opening new warehouses and stocking up on its products in an effort to mitigate damage from Brexit. In addition, it is working with suppliers to make sure it has enough raw materials at its plants. Mondelez International, meanwhile, is preparing for a "soft" Brexit, expecting interruptions to product flow for three to four weeks. It increased warehousing and transportation capacity in the UK, and is stockpiling all its European-made products, with no plans to raise prices, reported Reuters (Feb. 19).

Unilever is stockpiling Ben and Jerry's ice cream and Magnum bars ahead of Brexit. The company is holding a few weeks' worth of extra stock in case of disruption to supply chains, reported BBC (Jan. 31). In addition Coca-Cola HBC is stocking up inventory of raw materials to last between two weeks and a month in the face of an impending Brexit, reported Reuters (Feb. 14).

Industry officials claim farmers and food producers in Wales may suffer after Brexit if their lamb and beef is marketed under the UK flag rather than with specific Welsh branding. The body that markets Welsh lamb and beef expressed concern that in some parts of the world, UK red meat is viewed negatively and it wants to make sure that after Brexit there will be a clear way to differentiate between Welsh red meat and the UK-wide product, reported The Guardian (Feb. 12).

The European Commission agreed to compensate Irish farmers for a collapse in beef and dairy prices in the event of a no-deal Brexit. The compensation could also apply to Danish dairy and bacon farmers, which export heavily to Britain, reported Reuters (Feb. 13).

Additionally, the British government will use tools including tariffs and quotas to make sure farmers are not left at a competitive disadvantage by Brexit, according to the environment minister. In addition, he noted Britain will not lower its food standards in the pursuit of trade deals, reported Reuters (Feb. 18).