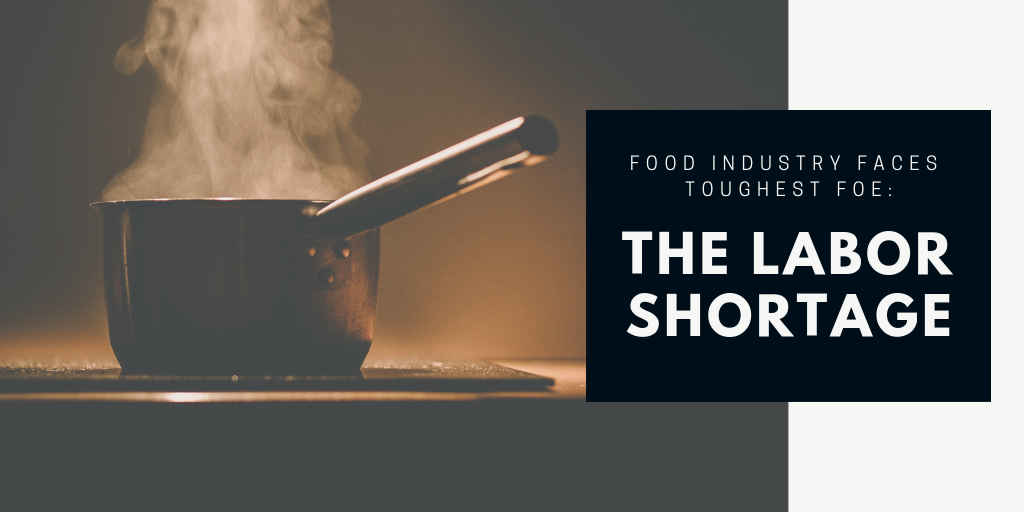 The food industry is facing a slew of new pressures in today's environment, but none may be as prolific as the labor shortage.

There were 898,000 open jobs in the accommodation and foodservices industry in August, an almost 20% increase from the same month in 2017, according to the Bureau of Labor Statistics' most recent report. In nondurable goods manufacturing, there were 202,000 job openings, an almost 9% increase from August 2017. Retail trade openings also increased in the month from the previous year, to 768,000 from 651,000.

The number of job openings overall reached a series high of 7.1 million in August. Throughout the month, hires and separations were little changed at 5.8 million and 5.7 million, respectively.

While the trucking industry has been openly struggling with labor shortages over the past few years, making moves like lowering driving ages and turning to self-driving trucks, the problem is becoming more apparent in other food-related industries.

Foodservice chains are struggling to fill positions and retain workers, leading to worries that customer satisfaction will decline or operations will fall apart, reported Business Insider (Oct. 17). "I don't see this problem getting easier," said Panera Bread's CEO Blaine Hurst. "I don't see somehow there's an extra 50 million foodservice workers that are gonna drop into the country and disperse around the country the way we need them to be dispersed."

One of the main concerns is that customer service will suffer and sales potential will hit a block as restaurants will have too much work and not enough employees.

Panera is addressing the issue by revamping its recruitment and training systems, while other chains, like Jack in the Box and Dunkin' Donuts, are investing in robotics and automation to fill the gaps in labor. Starbucks has also been amping up its employee benefits to retain workers, recently expanding its offerings to include subsidized backup care days for children or adults, reported CNN (Oct. 9).

Other food industries are feeling the pressure as well. Cargill Inc. has 1,000 unfilled jobs, largely at the meatpacker level. While the number represents less than 1% of its workforce, company executives claim the shortage is slowing output and hindering production of new higher-margin products, reported The Boston Globe (Oct. 18).

A high global demand for meat is pushing Cargill and other meatpackers to boost worker benefits in order to retain and hire workers, as well as increasing interest in experimenting with automation and robotics. "Recruiting and retaining qualified workers in the meat and poultry processing industries was always difficult," said Christine McCracken, an analyst for Rabobank International. "But it is now a perpetual grind."

Pilgrim's Pride Corp. noted in its August earnings call that it expects tight labor conditions "will govern the pace of industry capacity additions in the near to mid-term." Meanwhile, Tyson Foods Inc. is working with area schools to build needed skills for workers, raised base wages, and is helping workers with literacy classes and to get their high school equivalency diplomas and citizenship.

Increasing employee benefits and improving company culture may be a smart move, especially in industries like foodservice where young workers are vital. Members of Gen Z (those born in 1995-present) want to be part of a restaurant or business that has high ethics, appreciates diversity, and a positive reputation in the community, according to research from the National Restaurant Association Educational Foundation and the Center for Generational Kinetics. Gen Z has a strong desire to be part of an active, creative, collaborative and flexible work environment, while over half expect to get a raise in the first three months and receive a promotion within the first year.