Aug 5, 2019
Food Businesses are Raising Prices and Consumers are Paying
By Victoria Campisi 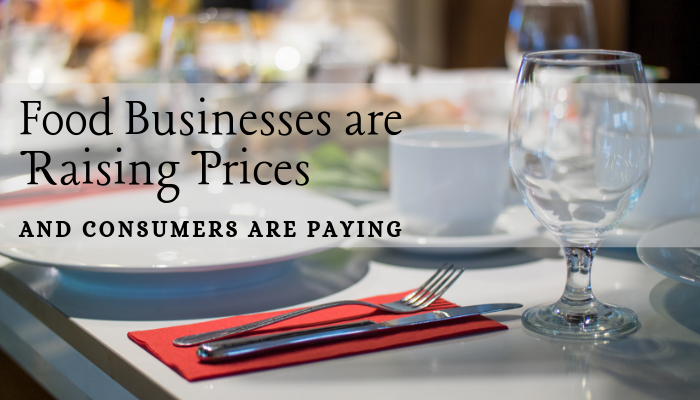 As the economic expansion continues, customers are willing to pay more, encouraging restaurants and food makers to raise prices.

Chipotle revealed that its digital sales nearly doubled in the second quarter, despite the rise in cost, reported CNBC (July 24). Shares of the company jumped 4% in extended trading, setting an all-time high. The cost of food, beverage and packaging rose 1.1% from a year ago, primarily due to rising avocado costs. However, net sales rose 13.2% to $1.43 billion, beating expectations of $1.41 billion.

"We are seeing no resistance," said Chipotle CFO Jack Hartung about the higher prices.

Sales at Dunkin' Brands Group Inc. rose in the quarter as customers ordered more expensive espresso drinks and menu items the chain added to its menu over the past year. The pricier espresso drinks are attracting new customers and returning customers are trading up from coffee drinks, reported Restaurant Business Online (Aug. 1). "This is our fastest-growing category," said David Hoffmann, Dunkin Brands' CEO.

Some restaurants saw flat or falling guest counts as they reported sales gains by raising prices, but traffic at Texas Roadhouse Inc. has not been hurt by the price increases implemented in 2018. The company saw 1.7% traffic growth during the quarter, according to CEO Kent Taylor.

Meanwhile, other companies are boosting discounts due to slower traffic. Applebee's same-store sales fell 0.5% in the latest quarter, causing the chain to increase deals. Applebee's President John Cywinski attributed the sales downturn to a slowdown of dinner visits by price-sensitive customers, reported Restaurant Business Online (July 31). "We failed to attract very important value-seeking guests, resulting in a little less incrementally than anticipated," he said. "Bottom line, when we're aggressive on price, value seekers tend to be with us, and when we're not, they tend to seek a deal elsewhere."

Additionally, grocery prices are rising after a long slump in recent years. "The U.S. consumer continues to be strong and resilient and confident, I think, in the economy," said Kellogg CEO Steve Cahillane after the company reported strong demand for its snacks in the latest quarter at the higher prices it is charging retailers.

However, Hershey Co. has seen weaker volumes for some of its products since raising prices on bagged candies, gum and mints by 2.5%. The company still plans to raise prices on chocolate bars and wrapped candies an additional 9% and expects demand to rebound as consumers to adjust.

“The price increase we announced last summer remains on track, and the final portion is implementing now as we execute our Halloween program,” said Hershey CEO Michelle Buck. “These actions reinforce our commitment to a more agile approach to pricing strategy that protects our advantaged margin structure while enabling continued investments in our brands and capabilities to drive category growth."

The price hikes will be at the wholesale level and will amount to about 10%, reported MarketWatch (July 29). Retailers set their own prices for their customers and, according to CFO Steven Voskuil, “a few select customers” loaded up on inventory in anticipation of the price increases.

In The Food Institute's recent webinar "Achieving a self-sustaining business model: Top 3 trends companies need to think about post-COVID-19," Greg Wank, CPA, CGMA, partner and leader of Anchin's food and beverage group, as well as David Eben founder and CEO of Carrington Farms, discussed how to have a more successful business while burning less capital and attaining self-sustainability. The following summarizes the...